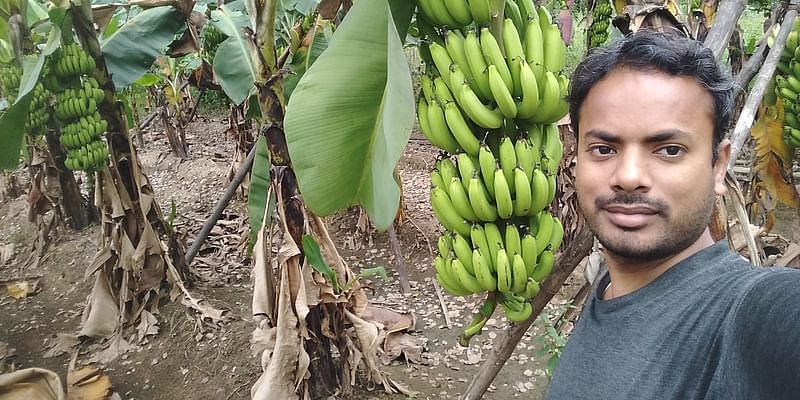 Through the trust, Vishal and his team are constantly working to train people in agriculture.

After the initial studies, Vishal was also preparing towards fulfilling the goal of engineering from a big institute like IIT, during this time he got to know about the subject of agricultural engineering and it is quite important for Vishal who belongs to the rural area was interesting.

Vishal, who studies MTech in agriculture, believes that most of the research related to agriculture is not available to ordinary farmers. This kind of information is limited to just a few people.

“During my studies of agriculture, I realized that there is immense potential for people and farmers in this area. Agriculture can become a source of better income for the common people. ”

Agriculture in India is usually done by traditional methods and this is also the main reason that the income of farmers in India is not that much compared to the farmers of western countries. Vishal started working on post harvesting and food processing factors with an aim to improve farmers’ income, taking into account the minimum exploitation of land and zero loss.

“Knowledge of food processing is one of the factors that can bring great benefits to farmers. They can reduce their losses associated with crops and make big profits. “

Vishal was the head of the Department of Agriculture at Centurion University and many other teachers were also associated with him in that direction. While teaching, Vishal decided to go to the grassroots level and implement these basic things, in which he was supported by some of his fellow professors and some of his old colleagues.

During this time, while resigning from his job, Vishal along with his colleagues formed the Village Samariddhi Trust. Initially, some of Vishal’s old colleagues and college passouts joined the trust. After this, the team started visiting the remote tribal areas of Odisha in the initial phase to take stock of the actual situation.

The team chose the Mayuravan district, which is situated on the border of Orissa, West Bengal and Jharkhand, to begin its work. The district was inhabited by people of primitive tribes, who had not yet been affected by the development of human civilization. These tribes were also not aware of agriculture and they depended only on hunting for survival. The team started its work by providing education to the children of these tribes, in which the volunteers associated with the team also supported them.

The result of increased awareness after the education of these children was that the people of the tribe showed interest in agriculture and within a year only about 500 families took up agriculture as their livelihood.

“The people of this tribe were addicted to a particular type of liquor, we first freed them from this discrepancy and planted fruitful trees around their house.”

Going forward, the team presented a concept called Diet Board, in which each family of the community was motivated and trained to grow fruits and vegetables at a place of about 12 hundred square feet. This solved the problem of maintenance of those families.

The trust also introduced people to the cultivation of lemongrass and also trained them to extract oil from it and its bottling and marketing. Later this model was implemented elsewhere. The team worked to take forward the food division in Kandhamal district as well as elsewhere.

The effect of the food board was that even in the backward areas of agriculture, people were not only able to grow vegetables for their sustenance, but they were able to get some of these vegetables to the local market and get a bench, so that their Some income was also started. The team also started training people in the cultivation and processing of turmeric.

The team also started training groups of people for beekeeping, mushroom cultivation, seed processing and integrated farming. Trained people today also provide training to other people, which also earns them income. The team has also worked to create a market for these products, where these products prepared by farmers are sold.

“People who are working in cities are also connected to some village. We have to work on increasing employment opportunities in the village itself, so that we can restore the pride of the villages and we are moving ahead with the goal of making the village self-reliant. ”

The team leaves people to work in the field after training and moves to the next stage. The team is moving towards creating an extremely large and strong number of such trained youth in the state, who are fully trained in production, processing, marketing and other aspects.

According to Vishal, the trust is currently working on 7 districts of Odisha, but in the near future Vishal is aiming to move to Uttar Pradesh, Bihar as well as other states. Volunteers are constantly associated with the team, who are fully trained.

The Trust has also trained the disabled in the field of agriculture as well as has made their strides towards providing employment to them and this process is also continuously moving forward.

“Anyone can join us. You can get in touch with us, work with us, learn and go to your area, work with local farmers or even personally in agriculture. ”

Through the Trust, 17 thousand farmers of Orissa have been trained so far and this number is continuously increasing. The Trust signs projects with several public sector institutions in the region and this is primarily its revenue model.

If you want perfect figure like Malaika, then you also do Planck Exercise, fat will be trimmed in a few days

Keep these things in mind while withdrawing cash from ATM, fraud will not be hunted