Weird figures made on the banks of the lake, people remembered chess after seeing the photo 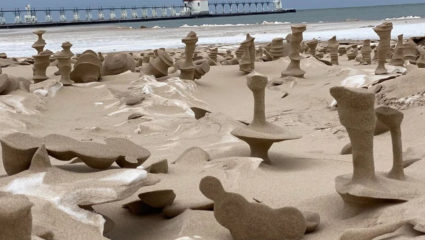 America: Often we get to see many types of artwork, but there is no artist greater than nature and nature. The example of which we get to see in many places of the world. Sometimes such things also come to the fore, which attracts people a lot. Today we are talking about a similar thing. People are surprised to see that. In fact, strange shapes were formed on the shores of Lake Michigan, USA.

In fact, due to strong winds near Lake Michigan, America, ‘weird figures’ have been formed on the shore of the lake. Which was captured by photographer Joshua Nowicki in his camera. As soon as this picture went viral on social MDA, people were surprised to see it. After seeing this figure in the mind of the people, the question arose as to how it could be made.

Seeing these figures made on the banks of the lake, people have been reminded of the chess pawn. Because, their texture is somewhat similar. Seeing the photos of these figures, people are talking about many things. Some people even jokingly consider it to be an artwork done by aliens. These photos are becoming quite viral on social media. Which are being liked a lot by the people. This picture has been shared on social media Twitter with an account named Nature_Is_Lit.

NITI Aayog released the report, Kerala at the first place in health index and Uttar Pradesh at the lowest place

Saudi Arabia: Two female activists freed from ‘imprisonment’, were jailed by the Crown Prince for opposing the ‘black law’