Hong Kong: Tong Ying, who raised his voice against China, got 9 years in prison, the first sentence under the National Security Act 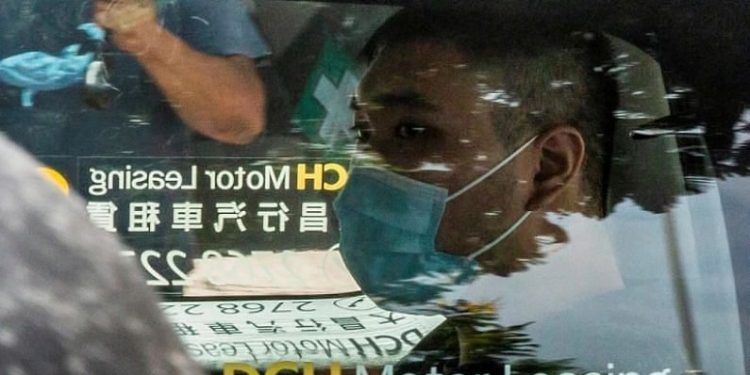 National Security Law: China implemented the National Security Act to suppress the voice of the people of Hong Kong and create terror here. Under which, for the first time, a protester has been sentenced to nine years.

Tong Ying-kit sitting in a car with a mask on

Tong Ying-kit Punishment: On Friday, a pro-democracy protester was sentenced to nine years in prison for the first time under Hong Kong’s National Security Act. The Hong Kong High Court on Tuesday convicted 24-year-old Tong Ying Kitt of involvement in separatism and terrorist acts in the first trial filed under the amended National Security Act. Tong was alleged to have rammed into a group of police officers on a motorcycle, holding a flag, on July 1 last year.

It was written on the flag, ‘Liberate Hong Kong, this is the revolution of our times.’ The ruling Communist Party of China imposed this security law on the former British colony last year after anti-government protests in mid-2019. Critics accused Beijing of violating the autonomy that Hong Kong was given when Hong Kong was given back to China in 1997 and its status as a global trading center was abolished (National Security Law Hong Kong). Human rights activists say the protection law is being misused to attack legitimate dissent.

Amnesty International’s regional director for Asia-Pacific Affairs Yamini Mishra said in a statement that Tong’s sentence was “a blow to freedom of expression” and that the law was a “terror tactic” among critics of the government. Hong Kong). In a statement, the US government criticized the “unjust outcome” of Tong’s trial and said the security law was used “as a political weapon to suppress voices of dissent”.

More than 100 people arrested under the law

It says China is ignoring the rights on the return of the territory guaranteed by Hong Kong’s constitution, the Basic Law and the 1984 Sino-British Joint Declaration. Meanwhile, Chinese officials, however, have dismissed this criticism and said that Beijing is restoring order and establishing security like other countries (Hong Kong China Latest News). More than 100 people have been arrested under the Security Act.

Tong’s lawyers had requested the court not to sentence the sentence to more than 10 years. He said that it has not been proved in the court that the attack was intentional (Tong Ying-kit Case). On Tuesday, a three-judge bench had convicted Tong of carrying out terrorist activities aimed at causing serious harm to society to fulfill a political agenda.