Exclusive: Black handiwork of Pakistan! Training is being given to Taliban fighters, TV9 reports from the biggest prison in Afghanistan 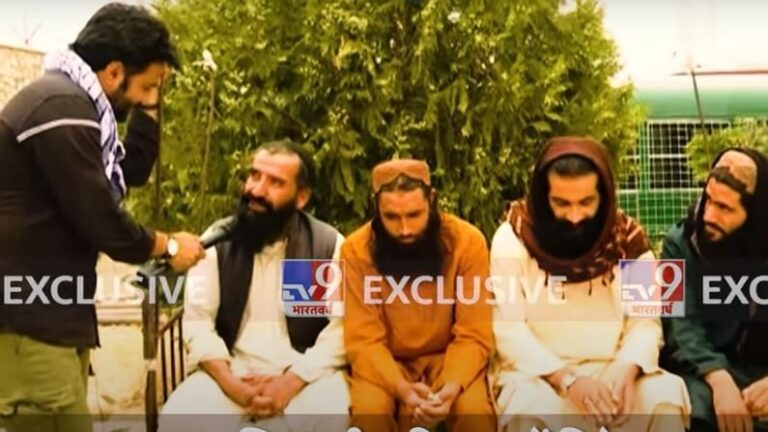 Business Khabar team reached the biggest prison in Afghanistan. Where the bandh Taliban fighters told that Pakistan has given them training and weapons.

During the ongoing war between the Taliban and the Afghan Army in Afghanistan, the Business Khabar team reached the country’s largest prison. Here Taliban fighters and terrorists are kept. This prison is located in the Logar province of Afghanistan, this prison is monitored by helicopter. The Taliban is constantly trying to capture Logar province. When the Afghan army officers took the team inside the prison, the team had a special conversation with the prisoners of Taliban fighters here.

In this conversation, evidence of the black exploits of Pakistan was found. Taliban fighters revealed that they were trained in Pakistan and then sent to Afghanistan. Four Taliban terrorists in jail had a special conversation with TV9. Of these, only one could speak in Urdu, the other three spoke in Pashtun, which was translated by an Afghan official. All these fighters were mind washed.

Taliban fighter Sher Aghah said, ‘We got training in Pakistan. Weapons were also found in Pakistan. I have been to Pakistan many times, have also lived in Peshawar. I was told to kill the infidels. During the training, we also met many Pakistan Army officers. After training, we were sent to Afghanistan. He told, ‘Training is given in many provinces of Pakistan, we were taken in a closed vehicle, so that the location is not known. We were trained to operate rocket launchers and many weapons. But now we want that this fight should end in our country.

I have come to fight against infidels: Taliban fighter

A Taliban fighter named Abdul Hadi said, ‘I am a resident of Pullalayam area of ​​Logar. I came to fight with the Taliban and fulfill my religious responsibility. I am with Taliban for 6-7 years. I am thirty years old and not married yet. We feel that the infidels living in this country have come to fight against those who have captured them. I can only drive AK-47.

Talking in Pashtun language, Babar Shah said, ‘I was part of Taliban, I did not take any training. I myself had decided to fight against the government, because non-Muslims have settled in our country. We had to fight the non-Muslims living in the country while fulfilling our religious responsibility. I heard and saw that the Americans had burnt the Quran, so I joined the Taliban.

A Taliban fighter named Aziz Rehman said, ‘I have been with the Taliban for ten years. I have not taken any training because I was living in my own locality. I was studying in school at that time. I did not go into any fight with Taliban, because I was a student, studying in school. He told, ‘I had some children with me who knew how to use weapons, from them I learned to use weapons. I only like to use light weapons like pistols and rifles etc. I have never killed anyone, I was arrested from my house in an operation by Afghan security forces.

Also read: Imran Khan waiting for Joe Biden’s phone, did not play ‘telephone’, then it hurt, Pak NSA said this

Recapping the Chicago Bulls: DeMar DeRozan takes over with 42 points in overtime win over the Milwaukee Bucks

DeMar DeRozan conjured one more second of late-game magic, powering the Chicago Bulls to a…

Wolves to be shot with paintballs to make them less tame

Buy these cool smartphones in less than 10 thousand price, number one in terms of performance

If you are looking for a good phone for yourself, then there is no need…