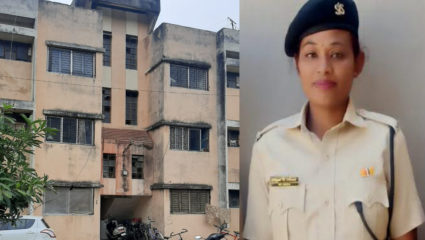 Wardha. The woman home guard set herself on fire by spraying petrol in front of the policeman’s residence; He was admitted to the hospital in Nagpur for treatment, where he died. Anjali Ramesh Mend (31) resident of the tribal colony complex of the city is working in the home guard team.

According to the information, she was married in the year 2007, but after two years Anjali got divorced due to not being able to get along with her husband, since then she lived with her parents, after that she started serving as a home guard, a few days ago she became a Mahatma. Gandhi was employed as a security guard at the International Hindi University.

Citizens rushed to save after hearing screams

During the night of 8.30 pm, Anjali reached the Police Quarter premises located in Pipri (Meghe) where the woman home guard burnt herself by sprinkling petrol before realizing that she went in front of the residence of Navnath Munde, a policeman on the second floor of Sharad Apartment. Hearing the screams, some family members residing in the apartment came out, they extinguished the fire by sprinkling water on the woman. From where after first aid, he was soon referred to a private hospital in Nagpur.

Police reached the spot and did Panchnama

On getting information about the incident, Superintendent of Police Prashant Holkar, Additional Superintendent of Police Yashwant Solanki, Sub-Divisional Police Officer Piyush Jagtap, Ramnagar SHO Hemant Chandewar reached the spot along with Dalbal. Such discussions were going on on Monday afternoon, Anjali Mand died during treatment, further investigation is being done by Ramnagar police.

The market of various discussions heated up

Policeman Navnath Mundhe was earlier working in Savangi police station, after that he was transferred to the local crime branch, he resides in the police quarters with the family. There are various discussions going on after the woman home guard burnt herself in front of their house.

Police looking for answers to many questions

After the incident, many questions are being raised. Home guard Anjali Mand burnt herself by spraying petrol. It is said that there were 2-3 cans full of petrol in front of the policeman’s residence. Petral had reached there with her. How did he get the matchbox? For what purpose did the deceased reach there? Was there some controversy before the incident? Such questions are being present, Ramnagar police is busy in finding answers to all these questions, what is the turn of the episode, everyone’s eyes are on this side.

The investigation of the case is going on

In the case, no complaint has been lodged by the relatives of the deceased in the police station so far, we have also recorded the statements of the relatives. The investigation of the case is started under the guidance of the seniors.

Put the government in the bank accounts of all the farmers

Registration is not being done on the CoWIN portal, still the message is coming only for those above 45 years, know what is the...

Vaccination of half the population in America is complete, yet more than 100000 Covid cases are coming out daily, know what is the reason