When the driver’s health deteriorated, the woman stopped the steering of the bus, watch the video 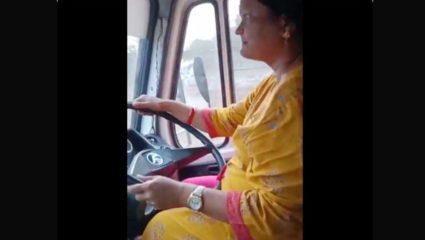 Pune: Salute to women empowerment! Women are no longer behind men in any respect. An incident proving this line has come to the fore in Pune. In this, the bus driver suddenly got feet and he fell down. Seeing the seriousness of the occasion, all the passengers panicked. In this situation, a woman named Yogita Dharmendra Satav took the steering of the bus. Driving the bus himself, the driver took the hospital for treatment and all the passengers to the safe destination.

According to the information received, a group of 22 to 23 women from Wagholi in Pune went for a walk in Morachi Chincholi of Shirur taluka. Then suddenly this incident happened. In this situation, the way Yogita saved the lives of the driver and other women by commanding the bus is truly commendable. This incident happened when everyone was coming back from Morachi Chincholi. After that Yogita herself drove the bus and brought it to the next village. There the driver was treated.

#Pune woman drives the bus to take the driver to hospital after he suffered a seizure (fit) on their return journey. #Maharashtra pic.twitter.com/Ad4UgrEaQg

After that, after calling another driver, all the women were safely transported 40 km to Wagholi. Former sarpanch of Wagholi village, Jayshree Satav Patil, along with her colleague and picnic organizer Asha Waghmare, paid her respects by visiting Yogita Satav’s house. On this occasion, Jayshree Satav said that many women drive four wheelers, but Yogita Satav of Wagholi has done the work of driving the bus in critical condition with great courage. He not only saved the life of the driver of the bus, but also the lives of all the women in the bus with him.

Happy Ram Navami 2021: Wish your friends and family on WhatsApp, Facebook and Messenger