The fruit seller’s cart collided with the car, then the angry woman did such a scandal on the middle road – watch video 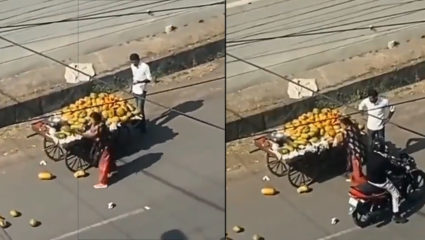 Bhopal: Many types of videos go viral on social media. Some of the videos are funny enough to see a lot of laughs. So there are some videos that are annoying too. But, the video we are talking about here today is very strange. This viral video is from Bhopal, the capital of Madhya Pradesh. In which an angry woman is seen throwing fruits from a fruit cart. This video is going viral very fast.

In this video viral on the internet, it can be seen that the woman is throwing papaya from the fruit vendor’s hand. She is also constantly arguing with the seller. The fruit seller is also pleading him to stop, but the woman does not listen to him and throws the papaya on the ground. After all this it is revealed that the woman took her car out of the parking lot and parked it on the road. After which the handcart passed by and the woman’s car gently touched her handcart.

Poor man pleaded her not to do so, but she didn’t stop. Should Women Get Away With Such Behaviour?

Such women will file false case, if men complain! pic.twitter.com/p501Neq6xN

Seeing the scratch on her car, the woman got angry. The woman first shouts at the driver of the cart and then starts throwing its fruits. Throughout the incident the hawker kept pleading, ‘Ma’am, don’t do this, I am poor.’ The fruit seller had also told the woman that he would compensate the loss, but still the angry woman was not ready to listen to him.

After seeing this video, after going viral on social media, people are getting very angry on the woman. People say that what did the woman achieve by throwing 8-10 papayas at the poor handcart. Along with this, people are praising the endurance power of the handcart. However, it is not known whether any case was registered on this incident or not. At present, people are giving their opinion after watching this video.