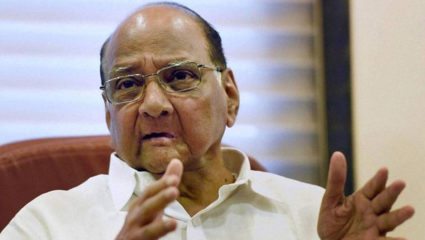 New Delhi. Where on one hand the dates for the assembly elections in Uttar Pradesh have been announced. At the same time, elections will be held in seven phases in the state. The first phase of polling will be held on February 10. At the same time, the period of defection is also going on before this. But the situation is that before the Uttar Pradesh elections, the wickets of BJP are continuously falling. Many big faces of the party have made a flurry of resignations within the last two days. Many more MLAs and ministers are standing in this queue.

At the same time, now NCP chief Sharad Pawar has taken a jibe at the BJP and said that not a single day passes here when no BJP leader leaves the party. Now you take Uttar Pradesh for example, here 13 MLAs are leaving BJP to join another party. I have also come to know that 4 BJP MLAs are leaving it today itself.”

Not a single day passes when a BJP leader does not leave the party. Take UP, for example, 13 MLAs are leaving BJP to join another party. I have come to know that 4 BJP MLAs are leaving it today itself: NCP chief Sharad Pawar pic.twitter.com/dzIPiLctdN

Here BJP is chanting a different tone, today UP Deputy CM Keshav Prasad Maurya has made a big claim. Yes, according to him, this time in the year 2017 also the party will register a landslide victory.

Army Day 2021: The country is celebrating 73rd Army Day, know the special things related to it

20 people of Indian origin got important responsibility in Joe Biden’s cabinet, 13 women including Kamala Harris in the list

N95 or KF94, which mask will give you more protection from Covid-19? Know the answer to all your questions