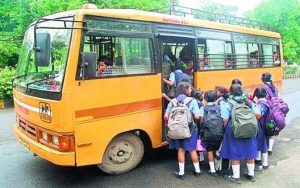 Wardha. The corona transition has again become a time for schoolbus, van drivers after one and a half, two years, due to the closure of schools, colleges, they were in financial trouble, they did not get any relief from the last few months that, again : Once a new crisis of Corona has arisen in front of them, the government should reconsider the decision to close the school, such demand is being made by the schoolbus, van driver.

Let us tell you that for the last one and a half years due to the Corona epidemic, schools, colleges were kept closed, in this there has been a huge loss to the education sector as well as the citizens associated with it, due to unemployment on the school van and bus drivers who work to transport school students. Crisis had been created, many families were suffering financial situation, somehow they could emerge from this situation due to lesser effect of corona, school, their buses and vans stood for months at the beginning of college, they started taking loans, they repaired the buses. Even he had not been able to pay the amount till now, once again the crisis of Corona has been created in front of him.

Keeping in mind the rising corona infected, the government has decided to keep the school, college closed till February 15. On the same lines, the local District Magistrate Prerna Deshbhratar also issued new orders and as soon as the said order came, the school bus and van drivers were blown away. Even before improving their condition, once again they got into financial crisis, hundreds of schoolbus and van drivers in the district, the owner, the government should once again consider the decision to close the school. All schoolbuses, van drivers are ready to follow the Corona rules, many have refurbished their buses and vans, have obtained certificates from RTO, borrowed money for this, they have to pay the said amount, so the government should provide them financial relief, such is seeking.

government to consider the decision

Israel threatened to ‘attack’ after attacking its oil tanker, so why did Iran provoke these 7 countries?

Union Budget 2021 Expectations: How will housing demand increase? These expectations are from the budget of home buyers