Prime Minister Narendra Modi held a virtual review meeting with the Chief Minister regarding the increasing cases of Corona in the country. 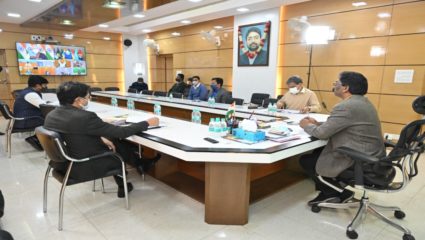 Ranchi : Prime Minister Narendra Modi today spoke to Jharkhand Chief Minister Hemant Soren regarding the challenges arising out of the rapidly increasing cases of COVID-19 and the preparedness to deal with it. Soren held a high level meeting with the Chief Ministers of all the states through virtual medium. He said that as the number of infected people is increasing rapidly, we need to be very cautious and careful. He told vaccination as the most powerful weapon to deal with Corona. The Prime Minister said that once again with the cooperation of the states, we will definitely emerge victorious from COVID-19.

In the meeting, Chief Minister Soren said that the state government has contained the first and second wave of COVID-19 to a great extent through better management along with strengthening the health infrastructure. Similarly, all necessary and concrete steps are being taken to control the third wave. The Chief Minister said that all such institutions and public places, including schools, colleges, gyms, parks, have been closed, from where the risk of spreading the infection is high. Necessary instructions have been given to the officials in this direction also so that there is no crowd. Apart from this, the best way to prevent the COVID-19 epidemic is to take vigilance and caution. Along with making people aware in this direction, they are being made aware to follow the COVID-19 guidelines.

Vaccination has been accelerated

Soren said that due to backwardness and complex geographical area, COVID-19 vaccination in Jharkhand has faced some challenges. But, by making a better strategy, expediting the investigation, the work of vaccinating more and more people is going on at a fast pace. He said that so far 80% of the people in the state have received the first vaccine, while the number of people who took the second dose is 50 percent. Besides this, about 22 percent of the adolescents in the age group of 15 to 18 years have taken the first dose of the vaccine. The Chief Minister said that 150 mobile vaccination vehicles are being used to speed up the vaccination. Through this work is being done to vaccinate people in remote rural areas. He said that so far 30,000 people have taken booster dose in the state. The Chief Minister assured that the target of vaccination would be achieved soon.

The Chief Minister said that in view of the third wave, the scope of COVID-19 investigation has been increased. Earlier, where normally 30 to 35 thousand samples were tested in the entire state, today 80 thousand corona tests are being done. State-of-the-art Cobas machine is also being used along with RTPCR in many districts for testing. He said that arrangements have been made for better treatment and medical kit with continuous monitoring of the infected living in home isolation.

There is no panic about the third wave

Hemant Soren said that the cases of corona infection have increased rapidly in Jharkhand too. But, due to the action plan made by the government to deal with it, there is no atmosphere of panic and fear anywhere. The Chief Minister said that since December 25, 34 deaths have occurred across the state due to COVID-19. But 24 of these include people whose age was more than 60 years. Apart from this, the other deceased were also suffering from some serious illness. No person has died only because of Corona.

Information about the preparations made to deal with COVID-19

In this meeting, the Chief Minister shared the preparations made by the government to deal with COVID-19. He said that in the initial phase of Corona, there were 250 beds in hospitals and other health centers, which has increased to 25000 today. Apart from this, PSA plants have been installed in the districts as well as in the blocks, so that there is no shortage of oxygen for the patients. Oxygen concentrators are also available in sufficient quantity. He said that at present there are about 31 thousand active cases in the state. At the same time, about 11 hundred are admitted in infected hospitals. Out of these, only 250 patients are in need of oxygen.

Monitoring is necessary for those who move in public places

Soren expressed apprehension that some people who have taken both the doses of the vaccine feel that they will no longer be infected. Because of this, they keep on moving in public places, markets and roads without taking any precaution. Some are also infected among such people, who are working to infect others. The central and state governments should take initiative together to identify these people and formulate a comprehensive strategy to stop their movement, only then we will be able to control the infection. He also apprised that most of the cases of infection in Jharkhand are coming from the border areas of the state. Here also a better system of investigation should be ensured along with monitoring.

Difficultty to take loan repeatedly on the same property through LEI, know how this special system can reduce the NPA of banks