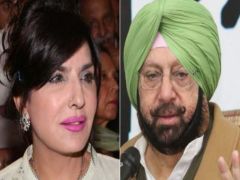 Pakistani journalist Aroosa Alam has been in the news ever since Captain Amarinder Singh resigned as the Chief Minister of Punjab. In the battle of Amarinder Singh vs Punjab Congress, a series of counter-attack is going on regarding Arusa Alam. Arusa Alam is being accused of being an ISI agent. Meanwhile, now he has given a strong reaction to the whole matter.

Talking to News18, Alam said that he has nothing to do with ISI. He said that the world’s largest democracy is insulting a woman. I feel sad that my photo is being shared again and again. I too have a family, kids and friends. I repeat that I am innocent. Alam said he was proud that he had acknowledged their friendship to the world.

Dabur: After the objection of the MP government, Dabur removed the advertisement of Karva Chauth with a homosexual couple

Arusa Alam on Tuesday termed the opponents of the former Punjab chief minister as hyenas and said she would drag them to court to defame him. Arusa said about the allegations of being an ISI agent against him, that I am very sad, very disappointed. I have been coming to India for the last 16 years, every year I used to get one year visa after due clearance.

Apart from this, Arusa Alam said that she is extremely disappointed with the leaders of Punjab Congress and will never return to India, as she is hurt and heartbroken by the whole incident. Arusa was seen defending Amarinder Singh and targeting his opponents in an interview with The Indian Express. He has said that I am very lucky that Amarinder has chosen me to be his friend in this whole world…Our mental and IQ level are very similar.

In fact, recently Punjab Deputy Chief Minister Sukhjinder Singh Randhawa had said that the alleged ISI link of Arusa Alam will be investigated. This was retaliated by Captain Amarinder and in tweets posted by his media advisor Raveen Thukral, it was said that Alam had been coming for 16 years on the approval of the Government of India.

Talking to The Indian Express over the phone, Arusa Alam said that I cannot believe that they can fall so low. Sukhjinder Randhawa, PPCC chief Navjot Singh Sidhu and his wife (Navjot Kaur Sidhu) are very consummates. They are trying to use me to embarrass the Captain. I want to ask him if he has become so mad that he has to use my name for his political purposes.

Arusa further said that I have a message for him. Please grow up and organize your house. Congress has lost ground in Punjab due to its internal conspiracy. Referring to the removal of Amarinder Singh from the post of Chief Minister a few months before the assembly elections, he asked who replaces his general in the middle of a war?

He said that now please fight your battle on your own, why are you dragging me into this Punjab Congress and government mess? Arusa Alam is a Pakistani journalist who covers defense related matters. Arusa Alam has been a close friend of Captain Amarinder Singh. Arusa Alam has lived in Punjab for many years as the Chief Minister of Captain.

Taliban said after shocking Kabul, ‘retaliation against the government has begun’

SanDisk launches its first wireless charger, can also back up smartphone data

Airtel’s great initiative, users can now get COVID-support through Thanks App