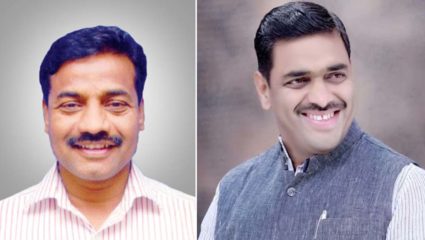 Pune: NCP dominated once again in the Pune District Central Cooperative Bank (PDCC) elections. Deputy Chief Minister Ajit Pawar went for the election of President and Vice President. Pvt. Digambar Durgade (Purandar) was elected as the President and Sunil Chandere (Mulshi) as the Vice President. It is believed that in view of the future elections, Ajit Pawar selected the office bearers by balancing them.

The first meeting of the newly elected directors was held in the auditorium of the bank under the chairmanship of Returning Officer and District Deputy Registrar (Rural) Milind Soble. For the post of president and vice-president, only one application was received from Durgade and Chandere respectively.

Therefore, it was decided to elect the office bearers unopposed. Pvt. Durgade had earlier served as the chairman of the bank. He was expected to be selected in view of his immense experience of operating the bank. On the other hand, the young face has been given a chance in the form of Chandere. In the first meeting of directors, along with the directors of the bank, Deputy Chief Minister Ajit Pawar, Home Minister Dilip Walse Patil, Minister of State for Dairy Business Dattatray Bhare along with NCP MLA Ashok Pawar, MLA Dilip Mohite Patil, Congress MLA Sanjay Jagtap also attended.

The district bank has a total of 21 directors, including 17 from NCP, 2 from Congress and 2 from BJP. Deputy Chief Minister Ajit Pawar interacted with the media after the election of office bearers of Pune District Bank. When asked about the future of the banks, Pawar said that it is very difficult to run the banks in the current situation.

As soon as iPhone users updated their phone to iOS 14.6, this big problem started coming in the phone

Many users complained about this on Reddit. Many users have also shared their experience on…

Soundproof Window Plug: Insert & How To Make It?

Window plugs are a simple, inexpensive technique to soundproof your home windows. They may be…

6 Intraday Calls Suggested By Experts In Falling Market, Which Can Make Great Earnings Today, You Have Any Of These!