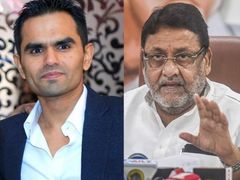 NCB’s Mumbai unit’s zonal director Sameer Wankhede said that his family is being personally attacked by Maharashtra minister Nawab Malik and he will take legal recourse in the matter. Samir Wankhede told the media, “In the last 15 days we are being attacked personally. My dead mother, sister and retired father are being attacked. I strongly condemn it.”

In fact, Maharashtra minister and Nationalist Congress Party (NCP) leader Nawab Malik had alleged that Sameer Wankhede was in Maldives during the pandemic, when several Bollywood celebrities were holidaying there. He alleged that “recoveries” took place in Maldives and Dubai and said he had photographs to prove it.

According to India Today, Samin said, “The minister is speaking wrong. It is absolutely false. I went to Maldives for a holiday with my kids. I have taken proper permission from the officer for this. I did not meet anyone and I No one else wants to explain such allegations. In December, I was in Mumbai, when they said I am in Dubai. It can be investigated.”

Sameer Wankhede when asked if he would take any legal action regarding the allegations of Maharashtra minister Nawab Malik, he said, “I am a central government employee. So I have to take proper permission from my superiors and after that, I I will take legal action.”

On Nawab Malik’s statement that Sameer Wankhede should be sent to jail, he said, “My best wishes are with him. I am a small government official. He (Nawab Malik) is a big minister. If they want to put me in jail to remove drugs, So I welcome him.” Wankhede further said that I will have the courage and strength, I will work better.

At the same time, after Sameer Wankhede’s warning to take law action, Minister Nawab Malik said, “In the morning his (Sameer Wankhede) sister said that her brother has not gone to Maldives. Then he himself said that, and even NCB’s press note I was also told that he had gone to Maldives. He denied that he was in Dubai. On Twitter, I had posted a picture with a timeline.”

Malik further said, “He said he will take legal action, of course there is law in this country. He is free to take the legal path and I have the right to take the legal route too. Definitely take the matter at the appropriate forum.” It will be done and it will definitely happen in future.”

Dawood’s ‘ally’ gets freedom from an American decision, Pakistan will be released from London jail

Corruption spread from top to bottom in India after independence, research of American sociologist