Navratri 2021: Temple reopens, but place ban on Durga Puja festival, know the condition of your state 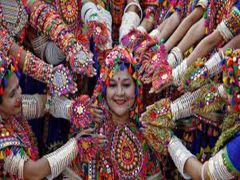 Navratri has started across the country from today. Due to Corona virus infection, many states have issued guidelines in view of this festive season. Meanwhile, the Maharashtra government has announced the opening of all religious places from Thursday at the beginning of Navratri festival.

The Uddhav government had said last month that permission would be given to open all religious places in Maharashtra from October 7. Meanwhile, the state government has issued a guideline amid the possibility of a third wave of corona virus.

Not only Maharashtra but many other states are also among those issuing guidelines. In which many states like West Bengal, Odisha, Gujarat, Uttar Pradesh are included. These states have issued guidelines related to corona. At the same time, in view of the possibility of a third wave, the central government has suggested the states to take full precautions.

Maharashtra government issued guidelines for Navratri, this year also there was a ban on Garba-Dandiya

These states have issued guidelines

The Maharashtra government, in its guidelines, has banned cultural events in the state for the Navratri festival, which will run from October 7 to October 15. Distribution of Prasad of any kind is prohibited. It is necessary to wear a mask while visiting religious places.

Children below the age of 10 years, senior citizens and pregnant women have been advised not to visit religious places. Public mandals or committees have been asked to provide separate gate facilities for entry and exit to avoid crowding of devotees. Religious programs of any kind are banned.

Online pre-booking is going on for the devotees of Siddhivinayak temple in Mumbai. For this Shree Siddhivinayak Ganapati Temple Trust has created an app. In which permission will be given through QR code. QR codes will be issued to only 250 devotees every hour.

Shirdi Sai Baba: Shirdi Sai Temple located in Maharashtra has been opened for devotees from 7 October. Management of Shri Sai Baba Sansthan Trust has said that online passes will be issued to the devotees for darshan. Every day 15,000 devotees will be allowed to have darshan. The temple administration has closed the gate no. to enter the temple. 2 is set. At the same time, exit facility has been provided from gate no.4 and 5. Dhyan Mandir and Parayan Kaksh will remain closed.

In West Bengal, Mamta government has issued guidelines on Durga Puja. In this, the pandals of Durga Puja will be open from all sides and any kind of cultural programs have been banned here. The state government has banned the celebration of the annual Durga Puja immersion. It has been advised to use different gates for coming and going.

Masks have been made mandatory for all the devotees visiting the pandals. It has been advised to avoid overcrowding everywhere. While social distancing has been asked to be followed, priests have been asked to use micro phones to chant mantras. So that even people standing far away can hear it.

In the national capital of the country, Delhi Disaster Management Authority (DDMA) has allowed devotees to visit religious places, but has banned the gathering of crowd. The Kejriwal government has banned fairs, rallies and any kind of procession during the festive season.
Not only this, Chhath Puja has been banned in public places. Where any programs are taking place, it has been asked to provide facilities from different gates for the coming and going of the devotees. Only people are allowed to sit on the chairs, they are not allowed to stand. Have been asked to follow social distancing. Organizers are required to record their program from start to finish.

Guidelines have also been issued for Mumbai, the financial capital of the country. In this, the civic body has banned Garba in the city. According to the guidelines, a limit has also been placed on the height of the idols. In public pandals and mandalas, the height of the idols cannot be kept more than 4 feet. At the same time, an idol more than 2 feet high cannot be brought in the house for worship. This year also the festival of Navratri and other festivals have been asked to be celebrated with simplicity.

The Gujarat government has banned the organization of Garba at commercial places. The state government has allowed up to 400 people to participate in the Garba program in residential societies and on the streets. All those participating in Garba should have both doses of the corona vaccine.

Bruhat Bengaluru Mahanagara Palike (BBMP) has said that not more than 50 people will be allowed during the prayers. The height of the idols should not be more than 4 feet. The municipal body has banned distribution of sweets, fruits, flowers.

In Uttar Pradesh, the Yogi government has issued guidelines in view of the corona virus infection during Navratri. It states that idols should be installed only in vacant places. It is important to keep them as low as possible. Small vehicles have been asked to be used for immersion of idols. Not only this, at least people have been asked to participate in the immersion program.

Jeff Bezos to step down as Amazon CEO; How much wealth is the world’s second richest person?