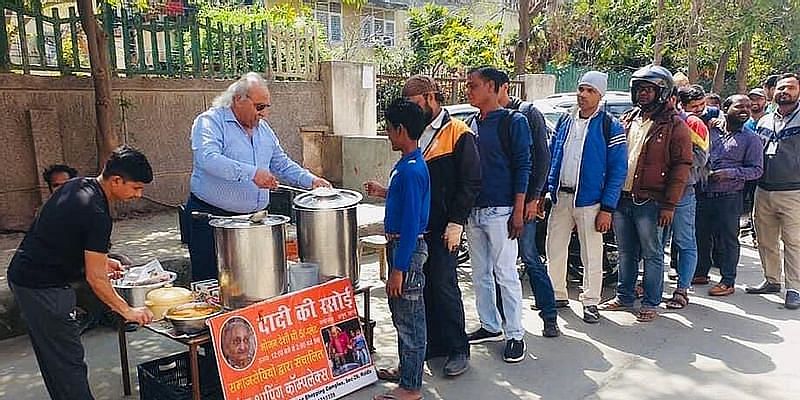 Every day in Sector 9 of Noida, around 500 people from various social sectors queue up outside a store to get a full meal for just Rs 5.

Dadi Ki Rasoi, an initiative of Anoop Khanna, provides quality food for this minimum amount. The 62-year-old social worker believes that every human has the right to food, clothes and medicines – with dignity.

“My purpose in life is quite simple – small steps bring big changes. From education to the welfare of sports, I have worked in my personal capacity to help my fellow citizens by taking one step at a time. ”

Spirit of a player

Born in Moradabad, a small town in Uttar Pradesh, Anoop Khanna is full of the spirit of the player he cherished during his school and college days. He encourages youth to participate in the field of karate, badminton and athletic sports and is also actively involved in the development of sports facilities in Noida.

Since 1984, Anoop has been running four pharmacies across Noida. But, businessmen also serve as a pillar of support for members of their community.

“My father, who was active during the freedom movement and worked with freedom fighters like Mahatma Gandhi and Muhammad Ali Jinnah, always inspired me to work for the welfare of the nation.”

“The basic requirement for any person is food, clothing, and medicines, and my aim is to make these three things accessible to the poorest people,” says Anoop.

To make this objective better, on 21 August 2015, he launched Dadi Ki Rasoi to provide food for just 5 rupees.

The food is cooked in desi ghee. The menu includes dal chwal, kale chickpeas and other vegetables so that people can get some variety. He claims that the food has been prepared with utmost hygiene, is monitored by him and has four CCTV cameras in the kitchen.

Apart from the food, it also includes sweets like biscuit packets, juice packs, and sometimes Rasgullas, which are sold for just Rs 5 per item, depending on the contribution the stall receives every day.

But why not give it to the needy for free?

To this, Anoop says, “To honor dignity and not to see the poor as beggars, I decided to take a nominal sum of Rs 5 and not provide food for free.”

Anoop is able to manage the cost with the support of his two children, who are settled overseas.

Anoop also runs a Sadbhavana Store, where the needy can get clothes for Rs 10.

“We all discard clothes, shoes, books and many items that may be useful to others. At this shop, the poor can shop like any other person. Inspired by my small efforts, many people have now come forward in this initiative and have extended their support. ”

People can also borrow special outfits such as Ghaghra and Suits (depending on availability). Instead of paying for clothes, all they have to do is clean out the outfits and return them.

Initially, everything was taken care of by Anoop, but he has now employed people to take care of both initiatives. Despite being a non-profit, he makes sure that he pays the people who work with him.

Suraj Kumar who gave him anoop or uncle it is said. They say, “I do most of the work Dadi Ki Rasoi And I do at medical stores, especially when Uncle is not there. I am very happy to be associated with a social worker like him. ”

Anoop was recently praised by Sanjay Kothari, Secretary to the President of India for his efforts, and was invited to share his experiences with President Ram Nath Kovind on January 3, 2020.

For 25 years, Anoop has been helping people through many social movements and hopes to see India in a better position, starting from Noida with better infrastructure and sanitation.

Renowned for his passion for social reform, Anoop is becoming the cause of education for all and has also campaigned against the school fee hike in Noida.

“It was under our banner that a massive movement was started against the excessive fee hike in private schools, which is now spread across the country. We fought on the streets and took up the matter legally as well, ”he says.

Anoop helps provide quality education to underprivileged children and is a school mentor for children with intellectual disabilities.

They also have cancer awareness and Anti-tobacco campaigns, Led the Anti-Polythene Crusade and led the No Fuel Day drive to create awareness about energy conservation.

Anoop Was an active participant in Anna Hazare’s non-violent protest against corruption. He sat on a fast for about 12 days in Noida, supporting the movement. To encourage the voting population, he offered discounts to all voters at his chemist’s shop.

COVID-19 Challenge and the way forward

The epidemic disrupted many food joints, including Dadi Ki Rasoi. But facing the severe economic crisis – the weaker sections – vendors, daily villagers, construction workers – the team decided to do something.

Social workers believe in the democratic principle of ‘people’s government’ and try to put people at the center of governance. Anoop has also taken steps to mobilize the youth and participate actively in the well being of the society.

He is appointing consultants to bridge the gap between suggestions of citizens and local government actions. These advisors regularly meet and participate in governance activities.

Every big change can happen with a few small steps. “It is to provide an extra meal to the poor man on the street or a pair of clothes that no longer fit you or call a wrongdoing that does more harm than good – that is an actionable step too far. Can only by words, “concludes Anoop.

Meet Padmashree Haldhar Nag, many students have studied PhD only on this person till third grade

Why iPhones are sold expensive? Here’s the 7 reason behind Apple Inc