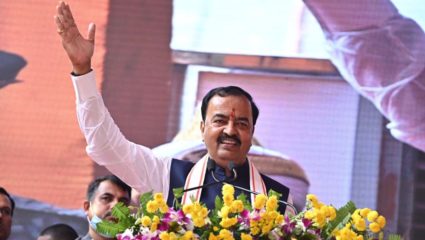 Lucknow: The BJP on Saturday released the first list of candidates for the Uttar Pradesh Assembly elections and UP Deputy Chief Minister Keshav Prasad Maurya (Deputy Chief Minister Keshav Prasad Maurya). He has been nominated from the Sirathu assembly seat of Kaushambi district, adjacent to his home constituency Prayagraj. With the announcement of Keshav Maurya, who became one of the strong faces of BJP and became the hero of BJP’s victory in 2017, to contest from Sirathu assembly seat, it has become a Haat seat. The voters of Dalit and Backward Classes decide the future of the candidate’s victory in the elections of this region having historical and religious history.

In 2017, BJP MLA Sheetla Prasad had won from this seat. At present, there is an atmosphere of happiness in the area due to the nomination of Keshav by BJP from here. Kaushambi District BJP President Anita Tripathi and sitting MLA Sheetla Prasad expressed happiness by feeding sweets to the workers.

In the joy of getting ticket to Keshav, slogans were also raised by the people of Sirathu area that this time the Chief Minister of UP will give Sirathu. Devganj, Kada, Alipurjeeta, Badlepurnanseni, Ghulamipur Ganpa, Kakodha, Kokhraj, Chakwan Chauraha, Saini, Habbunagar, Faridganj etc. in Sirathu, people celebrated by leaving sweets and crackers with the slogan of Jai BJP Tay BJP, Jai Keshav.

Keshav Maurya became an MLA for the first time in the 2012 assembly elections.

Prior to this, Keshav Maurya was elected MLA for the first time from his home constituency Sirathu in the 2012 Uttar Pradesh Assembly elections and BJP was successful in blooming lotus in this seat for the first time. Earlier this seat was continuously occupied by SP and BSP. In 2012, Keshav Prasad Maurya, the lone BJP MLA, was elected from the four districts of Allahabad division, Allahabad, Pratapgarh, Kaushambi and Fatehpur. In 2013, his fame spread across the state for leading the protest against the arrival of Christian missionary Peter Youngereen at Allahabad’s KP College and in the 2014 Lok Sabha elections, the BJP fielded him from the Phulpur Lok Sabha seat in which he won by over 3 lakh votes. Become an MP by defeating your nearest rival, former Samajwadi Party MP Dharamraj Singh Patel.

If we look at the caste equation of Sirathu Vidhan Sabha, there are about 45 percent voters of Scheduled Castes, 24 percent of voters of backward classes and about 32 percent of others. In this context, the decision of winning or losing this seat rests in the hands of the voters belonging to the Scheduled Castes. At present there are 3 lakh 65 thousand 153 total voters in Sirathu. In which male voters are 1 lakh 95 thousand 660 and female voters are 1 lakh 69 thousand 492. In 2012, after Keshav bloomed a lotus in Sirathu, it was captured by the SP in the 2014 by-elections, but in the 2017 assembly elections, it again came to the BJP. In the 2017 assembly elections, a total of 17 candidates were in the fray for Sirathu assembly seat in which BJP’s winning candidate Sheetla Prasad got 78621 votes, while SP’s Vachaspati got 52418 votes and BSP candidate Saidul Rab got 42782 votes. Were.

Sirathu has great importance from historical and religious point of view.

Sirathu has great importance from historical and religious point of view. In the Sirathu assembly constituency adjacent to the Ganges, there is a fort of Jaichand on the banks of the river Ganges, and there is a famous temple of Mother Sheetla Dham in Kada Dham of this area. There is a tomb of Khwaja Kharag Shah Baba and there is also an ashram of Sant Malukdas in Kada. If we look at the electoral history of Sirathu assembly, this seat was won by Hemvati Nandan Bahuguna of Congress in 1962. At the same time, in 1989 and 1991, this seat was made in the reserved category. From 1993 to 2007, this assembly seat was occupied by BSP candidates. In 2007, the BSP’s Vachaspati had won. In 2012, BJP’s account opened on this seat and Bahujan Samaj Party’s candidate Anand Mohan stood second by getting 9863 votes.

Investors of Vedanta will get a dividend of Rs 9.50 per share, Rs 3500 crore will be spent