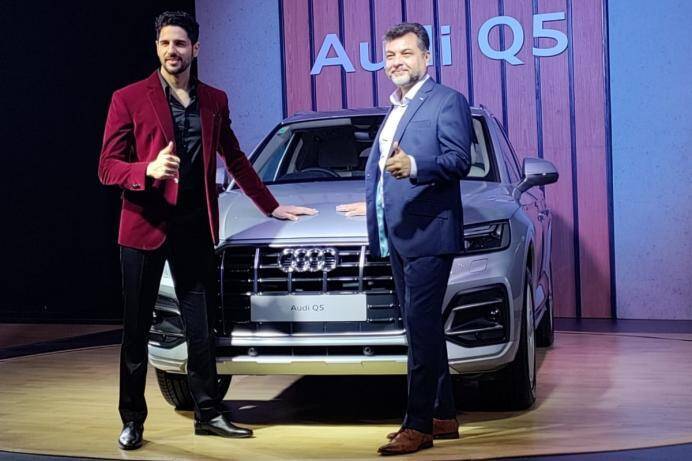 2021 Audi Q5 Facelift: Audi has finally launched the facelift Q5 (2021 Audi Q5 Facelift) in India today. The starting price of the new Audi Q5 facelift has been fixed at Rs 58.93 lakh, ex-showroom. The Audi Q5 has been one of the best selling SUVs for the German carmaker Audi. The Q5 has returned to India in a new avatar after a long gap of almost one and a half years. It was discontinued in early 2020 after the implementation of BS6 rules. The Audi Q5 facelift has received several cosmetic changes, both inside and out. Apart from this, many new features have also been given in it along with some mechanical changes.

2022 Skoda Slavia: New Skoda Slavia equipped with great looks and great features will be launched soon, know everything from design to booking

In terms of design, the facelifted Q5 SUV gets Audi’s new octagonal grille with 6 vertical chrome slats and a new bumper with brushed aluminum inserts. The luxury mid-size SUV also gets new slimmer all-LED headlamps with LED DRLs. Talking about the side profile, it gets new 19-inch five-spoke alloy wheels. At the rear, it gets new LED taillamps with chrome accents. The Q5 facelift is broadly similar to its predecessor but looks more attractive with the new design.

On the inside, very few changes have been made to the Audi Q5 facelift. At the center of the dashboard is a new 10.1-inch touchscreen infotainment system that supports Android Auto and Apple CarPlay connectivity along with Connected Car technology. It even has Audi’s new-generation MMI software. Some of the other features include safety features like a Virtual Cockpit Plus (digital instrument cluster), wireless charger, a Bang & Olufsen premium 3D sound system, a panoramic sunroof and eight airbags.

Hero Electric will set up one lakh charging stations across the country, the company has tied up with Charzer for this

Coming to the powertrain, the new Audi Q5 facelift comes with a 2.0-litre turbocharged petrol engine. This turbo-petrol motor generates 249 hp power and 370 Nm peak torque. The engine comes mated to a 7-speed dual-clutch automatic transmission. The new Audi Q5 facelift has been launched in India in two trim levels. The first in this is Premium Plus End Technology. Its price ranges from Rs 58.93 Lakh to Rs 63.77 Lakh, ex-showroom. The booking for the same has already started and can be booked online or at your nearest Audi dealership by paying a token amount of Rs 2 lakh. This new car will compete with Mercedes-Benz GLC, BMW X3, Volvo XC60 etc.

Why these celebrities’ tweets are sold in crores, big reason came out

After Mukesh Ambani, Gautam Adani also got a setback, 3 out of 6 companies suffered huge losses

Google reached Delhi High Court to quash a decision, said – new IT law is not applicable to it