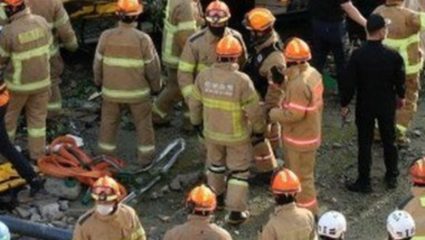 Seoul: South Korean rescue teams began searching for six missing workers on Wednesday after an underconstruction building collapsed in the southern city of Gwangju. Around 10 vehicles were hit by rubble on Tuesday afternoon after a 39-storey building under construction partially collapsed in the city’s Hwajongdong district. Dozens of nearby houses and shops have been evacuated as a precautionary measure. Debris is scattered in the surrounding streets.

Emergency service personnel rescued three workers, two of whom were pulled from a ‘shipping container’ trapped under the rubble. The rescue operation had to be halted for several hours amidst the danger of collapsing on the front side of this 39-storey building. After conducting security inspections by government and private experts and camera-equipped drones, emergency service workers re-entered the building with a canine squad on Wednesday afternoon. Gwangju Mayor Lee Yong Seop said an inspection of the site concluded it was safe for rescue teams to enter the building.

The search operation will be carried out mainly with the help of drones and dog squads. Officials said 394 workers were employed at the construction site, of whom six are missing after the accident. Lee and other officials did not comment about the likelihood of the workers being found alive. President Moon Jae-in ordered officials to investigate the cause of the building’s collapse and called for stronger security measures to prevent such accidents, the president’s office said.