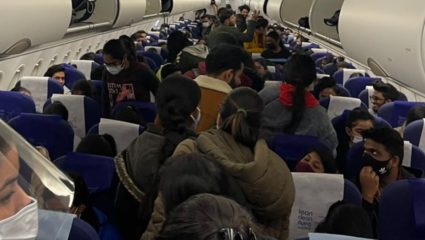 new Delhi: The Indian Embassy in Warsaw, the capital of Poland, has advised Indians stranded in Lviv, Tarnopil and other parts of western Ukraine to cross the border with Poland as soon as possible. Arrive at the Budomierz border post to enter.

In an advisory issued by the embassy, ​​Indians have been advised to avoid the Shehni-Medyaka border which is overcrowded and people have to stand in long queues to cross the border. India has launched an evacuation mission to evacuate its citizens from Ukraine, badly hit by Russia’s military operation, and airlifted them to the neighboring countries of Hungary, Romania, Poland and Slovakia after crossing the border by land. Used to be.

“Indians in Lviv and Tarnopil and other parts of western Ukraine can go to the Budomierz border post at the earliest from where they can enter Poland relatively soon,” the embassy said. “Alternatively, they are advised to evacuate to the south via Hungary or Romania,” the advisory said. They should avoid Shehni Medika border post where there is a huge crowd.”

The embassy said that it has also deployed its officials at the Medika and Budomierz border posts who will receive the Indians arriving there and facilitate their return to India. “Those entering Poland from any other border and where Indian officials have not been deployed may visit the Prezidenki, Podwislokje 48 hotel in the city of Jezo, where they are expected to stay,” the advisory said. has been arranged. From there they will be sent to India by flights operating under Operation Ganga.

It was told by the embassy that in case the student does not have money, he (embassy) will pay the hotel bill. It is noteworthy that Foreign Secretary Harsh Vardhan Shringla told on Tuesday night that 26 flights are scheduled to be operated in the next three days to bring Indians. (agency)

Zomato stock fell more than 12% in 5 days, should you buy on fall?

Here’s the most recent installment of our Miami Dolphins Q&A, the place South Florida Sun…

Ron Marinaccio is stepping up for the banged-up Yankee bullpen

Ron Marinaccio got here into spring coaching with individuals speaking about him. At least, pitching…

This year 2021 is raining IPOs and retail investors are showing tremendous interest in it.…