On the sixth day of the Russo-Ukraine war, Russia targeted residential bases in Kharkiv, so far 7 lakh people have fled 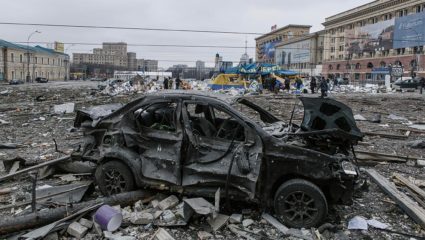 Moscow. It is the sixth day of Russia’s invasion of Ukraine, with a several-mile-long convoy of Russian tanks and armored vehicles approaching the Ukrainian capital and intensifying conflict on the ground. Russia on Tuesday intensified shelling targeting civilian targets in Kharkiv, Ukraine’s second largest city. The casualties continue to mount and reports surfaced that more than 70 Ukrainian soldiers were killed in a recent attack by Russian tanks on a military base in Okhtyrka, a city between Kharkiv and the capital Kyiv.

Ukrainian troops are putting up a fierce resistance and surprisingly, Russia has not been able to dominate the skies. There are growing fears that as Russia becomes more isolated as a result of Western sanctions, Vladimir Putin could take an even more aggressive stance and launch a world-changing war.

The people of Ukraine are bearing the brunt of the war. People have taken shelter in underground metro stations, bunkers and other shelters to save themselves. The Red Cross on Tuesday appealed for a donation of 250 million Swiss francs ($272 million) to help those affected by the war. The International Committee of the Red Cross and the Red Cross Federation said they feared “millions of people may face extreme hardship and suffering without better access and rapid increases in humanitarian aid.”

On Monday, a Ukrainian delegation held talks with Russian officials along the border with Belarus. No solution was found but talks were told to continue. Western countries have imposed various economic sanctions against Russia. Russia has been banned from participating in all international football matches, including qualifiers for the 2022 World Cup. What is happening on the front lines? Ukrainian officials say the center of Kharkiv was hit by renewed Russian shelling on Tuesday.

Along with residential buildings, the administrative building was also targeted. Casualties were not reported. Earlier, officials in Kharkiv, a city with a population of 1.4 million, said at least 11 people were killed and several injured in Monday’s shelling. Russian forces have moved closer to the Ukrainian capital, Kyiv, and Russian tanks and other military vehicles are traveling in a 40-mile convoy. Preparations are underway for a siege of Kyiv, but Ukrainian troops have shown strong resistance in the capital and other cities.

Ukrainian President Volodymyr Zelensky urged the West to declare NATO a full-fledged “no-flight zone” over Ukraine for Russian aircraft, helicopters and missiles. Britain’s Deputy Prime Minister Dominic Raab, however, on Tuesday rejected the request, saying it could escalate the war by putting the coalition in direct conflict with Russian forces. What are ordinary people doing in Ukraine? For many, war means taking shelter in underground places and subway stations.

Many people left their homes in a hurry. Many have moved to neighboring countries by train and buses or by walking for miles. In refugee shelters across Ukraine and around the border, parents have stayed to comfort their children. At a border station in Poland, boxes of clothing and toys were placed to be donated to refugees.

On Monday, UN human rights chief Michelle Bachelet said her office had confirmed that 102 civilians, including seven children, were killed and 304 others were injured in the Russian aggression. However, he said the actual number could be higher.

Effect of sanctions Experts believe that Russia will try to reduce the impact of financial penalties by relying on energy sales and leaning towards gold and Chinese currency. Putin is also expected to transfer money through the accounts of small banks and elite families that are not subject to sanctions or deal in cryptocurrencies. Russia’s hopes also rest on its ties with China. What is happening in the United Nations? The two main bodies of the United Nations – the 3-member General Assembly and the more powerful 15-member Security Council – held separate meetings on Monday to discuss the situation.

The General Assembly would give the opportunity to all members of the United Nations to speak about the war and more than 110 signed up to do so. The speech will continue on Tuesday. The General Assembly is expected to vote later in the week on a resolution coordinated by EU envoys working with Ukraine.

Meanwhile, the chief prosecutor of the International Criminal Court said he plans to launch an investigation “as soon as possible” into possible war crimes and crimes against humanity in Ukraine. How many people have left Ukraine? The UN refugee agency has said some 660,000 people have moved to neighboring countries since the start of the Russian invasion.

UN High Commissioner for Refugees Filippo Grandi has said the UN expects the number of Ukrainian refugees to reach 4 million in the coming weeks. (agency)

Now the common citizen of the country will fly, bids for 392 routes were called after UDAN completes four years