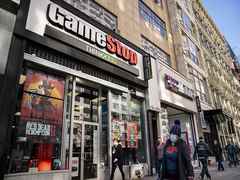 While GameStop’s stock plunged more than 25% on Monday on the New York Stock Exchange (NYSE), its stock declined more than 60% on Tuesday. On January 29, GameStop’s share price reached an all-time high of $ 483 per share, which now stands at just $ 72. Its shares on the NYSE fell 60% to $ 90 on Tuesday. At the same time, today its stock has dropped by 20% in the Stockgate Tradegate venue from Germany and its stocks are trading at $ 71.99.

What is the whole matter?

Last week, on the call of Reddit users, retail investors and short traders fiercely bought shares of GameStop. In fact, on January 12, GameStop’s share price was $ 20, which jumped to $ 383 in 12 trading sessions. That is, the shares of the company rose 16 times in 12 days. At the same time, the price of AMC Entertainment stocks was only $ 2.98 on January 21 which jumped to $ 20 on January 29. That is, the stock of the company increased 7 times in 6 trading sessions. Such a tremendous increase in the stocks of these two companies came due to short squeeze.

Stocks To Buy: Include these 30 stocks in your portfolio, you will get tremendous benefit from the announcements made in Budget 2021

Suppose Short Traders predict that the stock of XYZ Company will fall and its prices will fall from Rs 100 to Rs 80. They then take a short position and bet on selling the stock at Rs 100, when in reality it has a lower market price. But when the stock of the company starts accelerating in lieu of a fall, suppose it reaches Rs 120, then in such a situation, the traders trading, in short, have to suffer a huge loss, because they have to sell that stock for Rs 100. The company has to buy back for 120 rupees. Now, in order to make up for this loss, short traders start buying the stock, which causes the company’s stock prices to climb very fast. This phenomenon is called short squeeze, which has happened in the case of GameStop and AMC Entertainment.

China glass bridge broken by storm, man hanging in middle air at an altitude of 330 feet

China’s uncontrollable rocket will fall on earth today, will there be ‘destruction’ or no harm? Experts answer this

Emergency Fund: Create an emergency fund for a crisis like Corona, so that there is no need for money and tension.