Women suffering due to increase in cylinder price are not getting freedom from smoke, indigenous stoves are in trend again 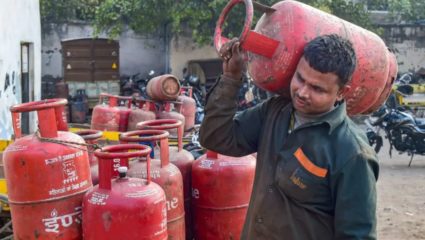 Asegaon. Pradhan Mantri Ujwala Gas Yojana was launched to prevent smoke-free kitchen and pollution. But due to the skyrocketing price of gas cylinder, the feet of common citizens are now seen moving towards the forest. At the same time, women have also been forced to cook food on the stove again.

Due to Corona epidemic, people are facing financial crisis for their livelihood. But with the government increasing the price of domestic gas cylinders including petrol diesel, it has become difficult for the common citizens to survive. At the same time, the women’s section is again seen making food on the stove by cutting woods of the forest. A few years ago the women of every household used to get kerosene.

But now kerosene has completely disappeared from the entire village. Due to which women including citizens have become very problematic. Because the price of gas cylinder is beyond Rs 900. In such a situation, juggling the bread of June 2 by doing wages is like a hardship in rural areas. So from where to get the extra money to fill the gas every month, this problem remains of every poor section.

Two years ago, subsidy was also available on the purchase of gas cylinders. But now the said subsidy has also been completely stopped by the government. On the one hand, there is no jugaad of work, on the other hand, making efforts for the bread of June 2 and increasing the price of cylinders in such a way as if the government is completely excited to bring the people on the back foot. Everyone has started discussing this kind of discussion in rural areas.

Difficulty living for the poor

It has become very difficult for the poor to live life in the present times due to rising witch inflation and various types of problems. In such a situation, if you want to live on the basis of wages. So for the poor people who do not even have agriculture. For them, the present time is like chewing iron gram.

The design of this awesome phone of OnePlus was revealed even before the launch, know everything

Iran huffs after Mossad’s cyber attack, says – uranium enrichment will be the highest so far