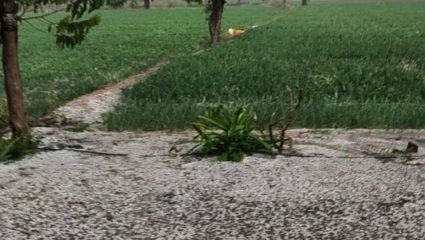 deoli, For the last four days, the rain in many tehsils of the district has increased the problems of the people. Due to rain, strong winds increased the cold in the weather. According to the Meteorological Department, the mood of the weather will remain the same for now. The havoc of fog will continue with drizzle. While unseasonal rains have caused a lot of damage to crops, the risk of infectious diseases has also increased. Along with this, there has been heavy damage to the crops of gram, wheat, tur and vegetables.

Citizens were feeling cold due to cold winds. In many areas, citizens were seen sitting while lighting bonfires. On Tuesday, the weather suddenly changed and during the afternoon drizzle rain knocked. The atmosphere suddenly changed since morning and it rained heavily at 8 in the morning. It rained intermittently in many villages of the tehsil.

rain is dangerous for health

Experts believe that there is no need to be careless in this cold rain. This rain and cold can also cause damage. Along with the cold winds, there is a thaw in the weather. Which is injurious to health. The doctor says that there is a need to keep the body warm in this season. For which adequate amount of warm clothes should be worn, while special care should be taken of food and drink.

Hail accompanied with heavy rain occurred in most areas of the district. As a result, there was a lot of damage to the crops of gram, wheat, tur and vegetables. Most of the farmers harvested the tur crop and planted it in the field. But the tur crop got completely soaked. There was also a lot of damage to wheat, gram crops. Due to which snatching the morsel that came to the mouth has increased the concern of the farmers.

How to link your bank account with Aadhaar, Deadline is 31 March 2021; Know the instructions of the Ministry of Finance

How hot is our sun? Knowing the temperature will blow your senses