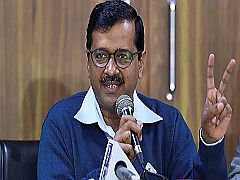 Delhi Chief Minister Arvind Kejriwal said on Wednesday that his government would help in the search for the missing farmers since the 26 January violence and would also speak to the Lt. Governor and the Center if needed. Kejriwal said that the Delhi government has also released a list of the names of 115 people lodged in different jails in the case of Tractor Parade Violence during the tractor parade of farmers on 26 January.

Arvind Kejriwal told the media, “We are releasing the list of the names of 115 protesters, who were arrested by police in the violence on Republic Day and who are lodged in different jails. Our government is looking for the missing protesters I will do everything possible and I will also talk to the Lieutenant Governor and the Central Government if needed.

Let me tell you that a representative team of the legal team of United Kisan Morcha (SKM) met the Chief Minister and handed over the list of names of 29 missing farmers to them. It also demanded a judicial inquiry into the alleged conspiracy against the farmers’ protests and to set up a medical board to investigate the jailed people. However, the Chief Minister did not comment on the demand for a judicial inquiry.

Kejriwal said that 115 people are in jail in connection with unfortunate violence during the tractor parade of farmers on 26 January. He said that it may be that many of those who have gone missing have been arrested in the case of causing a chaotic situation at the Red Fort and after that they have not been able to contact their family members. We are releasing this list of 115 people with names, ages and addresses so that their family members can identify them.

In fact, for the last few days many people and farmers associations have reached the Chief Minister regarding the case of the missing farmers. Kejriwal assured that they would try to find out the protesters, who still have no information and would introduce them to his family.

Tata Consumer Q3 Results: Stocks of Tata Consumer jumped 84% in 2020, but falling in stocks due to lower margins

How to get your PAN card made for free, this is a 10-minute process