The bull run in cryptocurrencies will not stop for the time being, will continue to rise 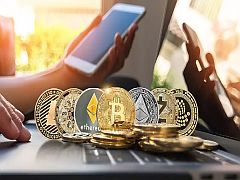 Given the recent decline, people are starting to talk about the end of the cryptocurrency’s bull run. But the truth is that not everything has been achieved yet. Let’s know why? The crypto market has been in a bull run for most of 2021.

However, there has been some decline in it from time to time. But it is sure that this bull run is not over yet. The bull run of crypto hit everyone’s lips when it surpassed all expectations and crossed the $50,000 level for the first time. The point to note is why is the current bull run different from the previous bull run?

With the presence of multiple online platforms such as WazirX at the moment, it is easier than ever for both retail and institutional investors to earn from this bull run of crypto. Apart from this, there is no possibility that this bullishness of crypto will cool down soon. There are some important reasons for this. Let’s take a look at them.

Due to the Corona pandemic, many people have lost their jobs. A lot of people are looking for alternative source of income. In such a situation, in the year 2020, crypto proved to be a hidden boon for him. But this does not mean that the enthusiasm among people about crypto will soon cool down. With the improvement in the situation of Corona, the lockdown is gradually being removed. And business activities have started. Hence, the consumer sentiment is expected to improve. This will lead to an increase in demand going forward.

In such a situation, crypto business will also see a boom. It will pick up on the back of improving consumer sentiment and pent-up demand. According to a recent report, there is a lot of enthusiasm for cryptocurrencies in Tier 2 and Tier 3 cities. We have seen 100% growth in crypto business in a city like Bhopal.

According to Chainalysis’s 2021 Global Crypto Adoption Index, India ranks second in the world in terms of cryptocurrency adoption rate. In fact, in all countries of the world, cryptocurrencies are considered to be the safest option to deal with market volatility and inflation.

Companies like Square and MicroStrategy are increasing their investments in the crypto sector. Along with this, there are many such companies which are preparing to accept crypto as a means of payment soon. Due to all this, there is a continuous boom in crypto.

Bans and crackdowns are a hidden boon for crypto

Negative comments from expert economists such as US Treasury Secretary Janet Yellen, Tesla’s announcement to stop accepting payments in bitcoin and campaigns against bitcoin mining in China are an immediate blow to the cryptocurrency. But in the long term these actions could prove to be a hidden boon for crypto.

Many countries and companies in the world are coming forward to recognize cryptocurrencies. Due to the action taken by China against bitcoin mining, its mining units can be built in other countries. Which can further accelerate its spread.

This is called the situation when the short term moving average price of an asset crosses its long term moving average. In the case of bitcoin, this was seen in September. Similar gold crises have been seen. Which indicates a huge increase in its trading value. This is a sign that crypto will continue to rise.

Due to the halving of bitcoin every 4 years (decrease in rewards from mining valid bitcoin blocks), its availability in the market decreases, due to which there is a lot of pressure on demand. As a basic principle of economics, due to high demand and low supply, the price of an asset remains high.

Due to the limited availability of bitcoin in the market, there is a huge gap between the demand and supply of this asset. Due to which its price is likely to continue to increase further. This bull run is bringing great potential for the cryptocurrency. Due to the acceptance of crypto from many institutions, countries and people, it will gradually become mainstream.

More and more platforms and portals are facilitating crypto trading through a variety of mediums and tools. India’s most trusted cryptocurrency exchange WazirX is also one of them. With its robust transaction processing and KYC, strong security, availability across platforms, sleek and simple design, WazirX offers its services to everyone.

BPCL-Humsafar started doorstep delivery of diesel in Delhi, so much diesel can be ordered sitting at home