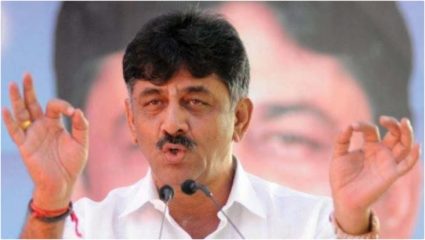 Ramnagar (Karnataka). Citing the increasing cases of COVID, Congress’ Karnataka unit president DK Shivakumar on Monday accused the BJP government of the state of giving a false COVID-19 positive report with the intention of obstructing the Congress’s padyatra and it was judicially investigated. demanded. He also alleged that there was a conspiracy to somehow disrupt the march by declaring him Covid infected. The Congress on Sunday began its 10-day padyatra to demand the implementation of the Mekedatu project on the Kaveri river despite the COVID-19 restrictions.

Shivakumar said, “Karnataka government is conspiring against me and my party to stop this padyatra in any way, this is its main program…to get the assistant deputy commissioner to investigate me and get my positive report last night.” was sent to me.”

On the second day of the padyatra, the state Congress president told reporters, “It (government) is giving false positive reports, so there should be an investigation….. It (government) is trying to end people’s lives by imposing restrictions for politics.” Is. I demand a judicial inquiry into the cases being reported.”

He said, “The rising infection rate belongs to the BJP. This is BJP’s positive, BJP’s COVID, BJP’s Omicron, BJP’s lockdown and curfew. She is showing this even when people do not have the disease.” On Sunday, 12000 new cases of COVID-19 were reported in Karnataka. Accusing him of conspiracy to show him to be COVID infected or to give a positive certificate, the State Congress President said that according to his information the Assistant Deputy Commissioner who came to him last night is now corona infected.

“Is he (who came in contact with an infected) primary contact or something,” he questioned. Then why did it (BJP government) send that officer to me? She wants to create a problem somehow. Why does she want to do such petty politics?” When asked why he doubted that the authorities would give his positive report even before the investigation, he said, “Don’t we have the information? I have complete information about the bureaucracy, ministers and officials give me the information.” Meanwhile, a video of Shivakumar allegedly scolding officials who went for his COVID-19 test last evening has gone viral on social media.

In the video, he is seen speaking in a loud voice, “….I am fit and fine. You can’t force me. I know the law.” To this, Chief Minister Basavaraj Bommai said, “We (government) are not only concerned about theirs but also the health of others who walked so far with them yesterday. It is the duty and generosity of the health department to check their health, without understanding that they behaved like this, we cannot do anything in this regard, it is their culture.”

Meanwhile, the police registered an FIR against Shivakumar, Leader of Opposition in the Assembly Siddaramaiah and Bengaluru Rural MP DK Suresh, and around 30 Congress leaders and others for taking out a padyatra despite the COVID-19 restrictions. (agency)

This great new car of Maruti is being available for only Rs 2.60 lakh, only till this date is the chance

COP26: PM Modi advocates ‘One Sun One World One Grid’, electricity will be supplied from one grid to all over the world