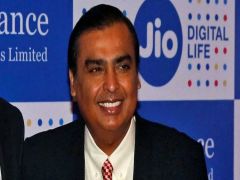 On the other hand, if we look at the earnings of the company, then on a percentage basis, it has seen an increase of 49.8 percent on a yearly basis. On the quarterly basis, there was a growth of 20.6 percent. The company’s consolidated EBITDA in the second quarter stood at Rs 26,020 crore, up from Rs 23,368 crore in the previous quarter. While the consolidated EBITDA margin stood at 15.5 per cent.

The company’s chairman and managing director Mukesh Ambani said on this occasion that the company’s performance in the second quarter of FY 2022 has been very strong.

The company has benefited strongly from its inherent strength as well as recovery in the Indian and global economies. All our business verticals have seen growth above pre-Covid levels. He further added that the company’s operational and financial performance reflects the strong growth in the company’s retail oil & chemical and digital business.

He further added that the company’s O2C business has benefited from strong demand for all products and higher transportation fuel margins. Reliance Retail’s business has seen the impact of the growth of both digital and physical platforms. Due to this, both the earnings and margins of the company’s retail business have seen an increase.

Ambani further said that Reliance Jio remains the driving force behind the transformation of India’s broad band market. Going forward, it will set new benchmarks for the industry. Significantly, on October 19, the company’s shares touched a new record high of Rs 2,750. The market cap of the company had reached 18 lakh crores.

The company has recently signed several agreements for solar energy. Since July, the stock has run up 24 per cent and its market capitalization has reached around Rs 18.3 lakh crore.

The ‘boat’ module of Russia which had made the ISS uncontrollable, now Astronauts got its ‘world tour’ done, watch video

LTV ratio also determines how much loan will be received, understand how it is calculated