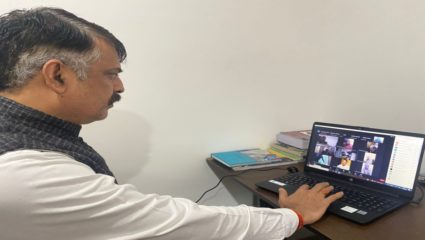 Ranchi : Under the chairmanship of Jharkhand Pradesh Congress Committee President Rajesh Thakur, an online virtual meeting was held to review the ongoing membership drive in the state. Addressing the meeting, Jharkhand Pradesh Congress in-charge RPN Singh said that membership drive has to be accelerated. In-charge RPN Singh directed the state president and the state membership in-charge to review it weekly and to take the next meeting himself.

Congratulating everyone on the new year, State Congress President Rajesh Thakur said that all the district in-charges have got the responsibility to make the special membership campaign successful starting from November 1, 2021, to connect more and more people in the district with the ideology of the Congress party. In the light of the decision of the meeting held with the party’s organization general secretary KC Venugopal on January 8, work in coordination with the concerned district heads to speed up the work and out of those who have received the membership receipts so far. Keep submitting the members who have become so far with complete details so that at the time of the conclusion of the campaign, there is no hustle and bustle.

The company that brought the Internet into the country, the government is going to sell its entire stake in it

Dogecoin is raining money after this statement of Elon Musk