Nearly 5000 doses of Corona Vaccine wasted in five states of the country, many doses were consumed in Bihar 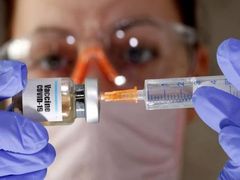 The country is running the world’s largest Vaccination Drive for the elimination of Coronavirus, but in the meantime, a very surprising thing has come to light that since the commencement of the vaccination program on January 16, Covid-19 About 5,000 doses of the vaccine have been wasted so far. These cases of wasting of vaccine supplements come from five states of the country, of which 11 percent are the highest in Tripura.

According to a report in Hindustan Times, these cases came to light in these states because many people did not reach for vaccine and the vaccinees opened the medicine vials. After opening the vial of the vaccine, it is necessary to use it within four hours.

Officials resolved the problem of vaccine wastage to some extent by allowing vaccinees to call those who were to be vaccinated later or on another day, to allow more people to be vaccinated. But since January 16, out of 100 people selected during every session, only 55 people have been selected and they were called for the dose.

On Thursday, this average figure was reduced to 49 out of 100 only, where the target was to vaccinate five lakh people. According to Dr. Rajesh Bhaskar, State Nodal Officer for COVID-19 in Punjab, the number was 1,200 doses.

Health officials in Bihar also said that vaccine waste was far below 10%. An official said that Bharat Biotech’s Kovaxin wasted more than Kovishield of Serum Institute because its vial size was larger.

Not only this, in Patna’s Nalanda Medical College Hospital (NMCH), where up to 25% of the vaccine was destroyed last week, many dosages have been lost there. Out of the total 301 session sites in Bihar, 295 were being covered.

Apart from this, health officials in Jharkhand, Andhra Pradesh, West Bengal, Himachal Pradesh, Jammu and Kashmir, Kerala and Chhattisgarh said that no vaccine has been wasted in them.

Honda Amaze facelift to be launched in India on August 18, can be booked by paying just Rs 5,000

Bring home a luxurious car worth 7.73 lakhs by paying just Rs 4111 every month, is also number one in terms of safety

IVF technology is the support of thousands in Pakistan, it was not easy for Dr Rashid to start it, the fundamentalists told it ‘haram’