NCP will contest assembly elections in three states, alliance with SP in UP and Congress in Manipur 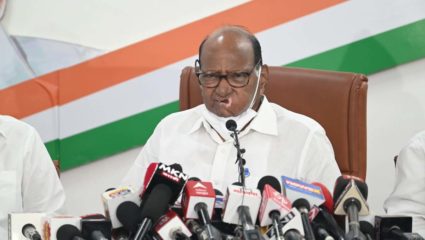 Mumbai: The Nationalist Congress Party (NCP) has announced to contest the assembly elections in three of the five states. On Tuesday, party president Sharad Pawar made a formal announcement in a press conference. He said that the NCP will field its candidates in the assembly elections in Uttar Pradesh (UP), Goa and Manipur. Sharad Pawar said that in UP, the NCP has decided to forge an alliance with Akhilesh Yadav’s Samajwadi Party and some other smaller parties. Whereas in Manipur and his party will contest the elections together with the Congress.

Sharad Pawar said that in Goa, NCP has decided to fight the elections in alliance with Shiv Sena. At the same time, efforts are on to include Congress in this alliance. Pawar also made it clear that his party would contest the elections in these three states along with Congress, Trinamool Congress and other smaller parties. He said that NCP has four MLAs in Manipur, so NCP will contest five seats this time, while talks are on with Congress, Trinamool and other parties in Goa.

Meeting with SP will be held in Lucknow

Sharad Pawar said that he himself will go to Uttar Pradesh next week. Where there will be a meeting with the Samajwadi Party and other parties in Lucknow and after that the seat sharing will be announced. He said that the alliance with Congress could not be done in UP because they have decided to contest all the seats. He said that it is the personal right of any party what it decides about contesting elections.

Change sure in UP

NCP President Pawar said that the way the people of UP are against the BJP government. So there it seems clear that change is certain. He said that Uttar Pradesh Chief Minister Yogi Adityanath has said that 80 per cent people are in our favor and 20 per cent are not. Pawar said that the Chief Minister belongs to everyone. In such a situation, the CM of UP has insulted the sentiments of the minority community by making such a statement. He said that whatever is in Yogi’s mind has come to his lips. Pawar said that if the unity and tolerance of the country is to be maintained, then it is not proper to increase such communal thinking. He expressed confidence that the people of UP will definitely vote against it and change will come in the state.

The process of leaders leaving BJP will not stop

Pawar said that after the leader Swami Prasad Maurya, who left the BJP and joined the SP, this process is not going to stop. He said that in the coming days many more BJP leaders would leave the party and join other parties.

No UPA without Congress

Pawar has once again made it clear that the UPA cannot exist without the Congress. He also refused to directly lead the UPA in place of Congress President Sonia Gandhi himself. Although Pawar said that the states where the Congress is strong, they should contest the elections, but in the states where their position is weak, the rest of the parties involved in the UPA should be given a chance. Only then can BJP’s NDA be fought strongly.

Congress minority leader from Uttar Pradesh Siraj Mehndi joined NCP in the presence of party president Sharad Pawar. On this occasion, Mehndi said that Pawar is the mastermind of changing the government. The way he has changed the BJP government in Maharashtra, in the same way the BJP government in UP will also change. Mehndi also said that now Pawar should take the leadership of the UPA in his own hands. Pawar, however, said that at present he has no such plans.

I am not super CM

Render of Redmi Note 11S with 108MP camera leaked, 4 cameras in the back