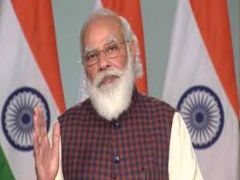 Mann ki baat: Amid the ongoing farmers’ agitation against the new agricultural laws, the Prime Minister of the country, Narendra Modi (Narendra Modi) is speaking on the radio today. This is the 73rd episode of Prime Minister Modi’s Mann Ki Baat. This program of PM is very important amidst the violence in Delhi on Republic Day, the peasant movement that has been going on for more than two months. The budget is also going to be presented a day later. PM Modi said it is sad to see the insult of the tricolor on 26 January.

PM Modi said- Today, many efforts are being made for road safety in India at the individual and collective level along with the government. We should all become active participants in these efforts to save lives. He said that Innovative Slogans are seen in the roads that the border road organization makes. They are very effective in making people aware of the precautions to be taken on the road.

Recently a month long Strawberry Festival started in Jhansi. Everyone is surprised – Strawberry and Bundelkhand, but, this is the truth.

You must have seen a few days ago, a non-stop flight from Bangalore to San Francisco in the US was commanded by four women pilots from India. This flight brought more than two hundred and fifty passengers to India after traveling more than ten thousand kilometers.

The government is committed to modernizing agriculture and is also taking many steps. The efforts of the government will continue. How to protect the environment also opens the way to income. It was seen in Arunachal. In this mountainous area, a paper named Mon Shugu is made for centuries. Trees do not have to be cut for this.

An initiative is being started for Young Writers on behalf of India Seventy Five. This will encourage young writers of all states and languages.

This time, in the parade of 26 January, two women officers of the Indian Air Force created new history. Whatever be the field, the participation of women of the country is continuously increasing. But, often we see that similar changes happening in the villages of the country are not discussed much.

PM Modi said that he must know about the people selected for the Padma Awards. In every part of India, the freedom struggle was fought with full force in every city, town and village. In every corner of the land of India, such great sons and great heroes were born, who sacrificed their lives for the nation, it is very important that we cherish their struggles and memories related to them. When India celebrates 75 years of its independence, your writing will be a perfect tribute to the heroes of independence.

PM Modi said that this month, the cricket pitch also received very good news. Our cricket team made a resounding comeback after their initial woes and won the series in Australia. Hard work and teamwork of our players is motivating. It seems a few days ago when we were giving each other auspicious wishes, then we celebrated Lohri, celebrated Makar Sankranti, Pongal, Bihu. Festivals were celebrated in different parts of the country.

With the beginning of this year, our fight against Corona was completed for about a year. Just as India’s fight against Corona has become an example, now our vaccination program is also becoming an example in the world. Today, India is running the world’s largest # COVID19 vaccination program. India has vaccinated more than 3 million of its Corona Warriors in just 15 days. Whereas a rich country like America took 18 days and Britain took 36 days to do this work.

PM Modi said that when I talk to you about my mind, it seems that I am a member of your family. Through this I feel like being among you. It does not seem that the first month of the year has passed.

PM Modi said that not everyone, in Delhi, on 26 January, seeing the insult of the tricolor, the country was very sad. We have to fill the future with new hope and newness. We showed exceptional restraint and courage last year. This year too, we have to prove our resolve by working hard.

Ujjwala scheme will be closed this month, Check Details

ITR Filing: Last chance to file ITR, know why due date this time

Relief to 6 crore subscribers; EPFO does not reduce return on PF, recommends 8.5% interest for FY21