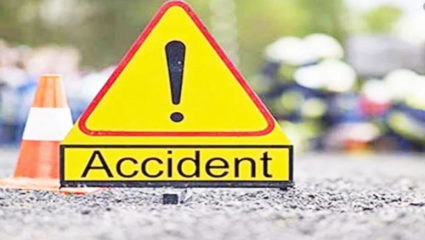 Nagpur. A painful accident took place on Tuesday evening in Vihirgaon of Umred Road. The car carrying the laborers was hit by the driver of JCB. The car driver died in this accident, while 5 laborers were injured. The deceased was told as Mahendra Dashrath Shandilkar (58), a resident of Sainagar, Bahadra. The injured include Sheetal Bhagat, resident of Pratapnagar, Ajit Pandit, resident of Amarnagar, Hingna Road, Nikhil Mule, resident of Bhiwapur, Akshay Dethe and Haridas Devkale, resident of Arshivadnagar.

Mahendra drives his passenger vehicle on Umred Road. During 6.30 pm on Tuesday, the laborers working in Panchgaon were coming towards Nagpur. Near Sarvodaya College in Vihirgaon, his car no. MH-40/KR-7097 was hit hard by the driver of JCB machine number MH-40/CH-1086 coming from the opposite direction. JCB’s bucket fell on the car after the collision.

The car was shattered from the front and due to being badly injured, Mahendra died on the spot. The workers sitting in the back seat got injured. Local citizens informed the police about the incident. The injured were sent to the hospital for treatment. After doing Panchnama, the body of Mahendra was sent to the medical hospital.

The police have registered a case against the accused JCB driver on the complaint of Mahendra’s son Omprakash. Sarthak Nehete, Thanedar of Hudkeshwar told that the injured laborers work in different mines and crushers in Panchgaon. Nikhil and Akshay have suffered serious injuries but are out of danger. The JCB has been confiscated by the police.

The vacation journey nightmare continued for passengers on the day after Christmas, as a whole…

Buy this cool phone at a discount of 75 thousand rupees, take it along and enjoy cashback too

On Motorola Razr, you will get a discount of up to 10 percent on shopping…

Lucknow: In Uttar Pradesh, the speed of the third wave of Corona seems to be…