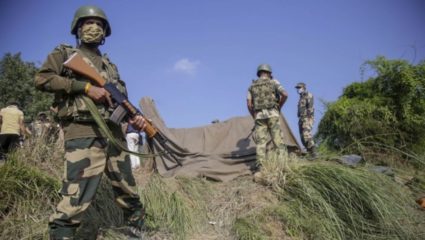 Five magazines, three AK rifles, four pistols with seven bullets, five packets of heroin and some ammunition were also recovered from the sack. He said that during patrolling, the force noticed the sack, which had ‘Karachi Fertilizers Company Limited’ written on it. It was not immediately known whether the consignment was dropped by a drone or was brought here by arms and drug smugglers from across the border, officials said.

Here a senior officer gave this information. The official said that 36 packets of heroin have been recovered from the drug smugglers. BSF Deputy Inspector General SPS Sandhu said that the Border Security Force came to know about the movement of smugglers at 2.30 pm. In the subsequent firing, Pakistani drug smugglers were killed and 36 packets of narcotics were recovered from them. It is suspected that these packets contain heroin. The search operation was going on in the area till the latest information was received, the official said.

The Job In aviation, there may be by no means a uninteresting day. Be it…

These are the best smartphones under Rs 15,000, all the features are available in less cost

To deliver the best features in 2021, smartphone makers including Samsung, Xiaomi and Motorola have…

Pic : Ayesha Khan @AyeshaK72429757 new Delhi. According to other big news of the morning,…