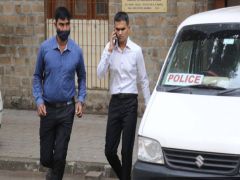 Mumbai Drugs Case: ‘Get me to sign on blank papers’, another witness raises questions on NCB in old drugs case

In his tweet, Malik posted the nikahnama of Sameer Dawood Wankhede’s first marriage with Dr Shabana Qureshi and the wedding photo of the sweet couple, which took place on December 7, 2006 at Lokhandwala Complex in Andheri West. It happened at 8 pm.

Malik claimed that Meher’s amount was Rs 33,000, the other witness in the eviction was Aziz Khan, who was the husband of Yasmin Dawood Wankhede, sister of Sameer Dawood Wankhede. He reiterated that the revelations about Sameer Dawood Wankhede were not about his religion, as is being portrayed in some quarters, including the opposition Bharatiya Janata Party.

Sameer Wankhede himself has given the answer after being told a Muslim in the Nikahnama issued by Nawab Malik. On Malik’s charge, Sameer said that I am a Hindu by birth and come from a Dalit family. I am a Hindu even today. I never changed religion.

According to NDTV, the NCB official said that India is a secular country and I am proud of it. My father is Hindu and mother was Muslim. I love both. My mother was a Muslim and she wanted me to marry according to the Muslim method, so I got married for my mother’s happiness.

Sameer said that but in the same month I got the marriage registered under the Special Marriage Act because when people of two different religions get married, it is registered under the Special Marriage Act. Religion does not change in this. He said that later there was a legal divorce as well. If I have changed any religion, Nawab Malik should show his certificate.

Malik said that I want to bring to the fore the fake method by which he has obtained caste certificate to get IRS job and deprived an eligible Scheduled Caste (SC) person from his future. Wankhede had earlier said that he and Dr. Qureshi had divorced by mutual consent and later married Marathi actress Kranti Redkar-Wankhede.

The new revelations came a day after Redkar-Wankhede and Yasmin Wankhede-Wankhede’s wife and sister were asked to challenge the minister to resort to personal attacks and kitchen politics and prove their charges before the courts .

His anger over the serial revelations on Wankhede by Malik in the last three weeks came to the fore on Tuesday with the most shocking claim that over Rs 1,000 crore has been extorted from Bollywood people in Mumbai and Maldives.

Kia Sonet bookings started, you can book at tokens amount of Rs 25000 from here

Republic Day Special: Include these freedom stocks in the portfolio, can get up to 41% return

Share Market News ,: Today the stock market will be closed on the occasion of Muharram, trading will start in the evening in the...