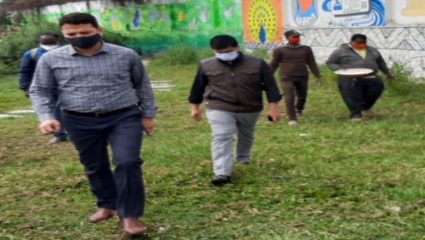 Aurangabad: Municipal commissioner and administrator Astik Kumar Pandey has worked tirelessly for the last one year from voluntary organization and public participation for the rejuvenation development of the city’s glorious Kham River. Along with the glory of Kham River, environmental supplementation and beautification, beautification, attractiveness have been made available for Balagopal and citizens.

On January 25, 2022, the Kham river will be inaugurated soon to commemorate the completion of one year of development work. On Friday, Municipal Administrator Astik Kumar Pandey visited the Kham river and took stock of the various works and gave special information to the officers and employees. The development works of Kham River Rejuvenation Development Project are being completed for one year on January 25, 2022. To give Kham river past glory and beautification, to complement the environment, Municipal Commissioner and Administrator Astik Kumar Pandey took along with the Municipal Corporation, Smart City, Vairak, Cantonment Council, Eco Sattva without government funds, deepening, widening of Kham river with public participation. Due to large-scale pinching, rain water did not enter the houses of the citizens living on the banks of the river even after two to three times of heavy rains this year.

The Kham River was included by the Central Government and the State Government.

The Central Government and the State Government have included the Kham river in the Meri Vasundhara and Namami Ganga campaign for this work done by Commissioner Astik Pandey. Around 50 thousand saplings were planted on the banks of the river from the iron bridge to the hot water. Environmentally complementary fruits and other different plants were planted there. Attractive feast and edible water have been arranged for the birds. Due to which the movement of animals and birds has increased. Beautification, beautification, attractive coloring and painting have also been done. Children’s park for small children, open gym, walking track for walking, volleyball ground, solar light arrangement, 100 benches for sitting, small pond, farm floor etc. as well as use of CND, excavated stone Excellent roads have been constructed using used, old paver blocks, cracked cement and iron pipes besides beautification.

Uber CEO did his own food delivery to earn crores, even after working all day, he got only this much money

Government makes preparations for LIC IPO, bids can be invited from merchant bankers this month