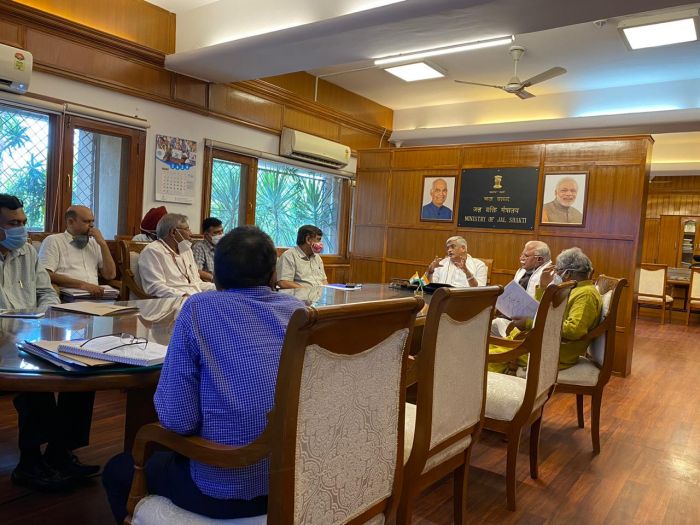 A meeting was held in the capital today under the chairmanship of the Union Minister of Water Power to resolve the much-discussed Sutlej Yamuna Link Canal issue between Punjab and Haryana. Which included Haryana Chief Minister Manohar Lal and Punjab Chief Minister Captain Amarinder Singh through video conferencing.

Chief Minister Shri on SYL issue today @mlkhattar The Union Minister of Water Power @gssjodhpur Chief Minister of Punjab through videoconferencing in the presence of @capt_amarinder Had a meeting with pic.twitter.com/i9GBgYJuwB

In this meeting which lasted for about 1 hour, the Chief Ministers of Punjab and Haryana presented their views before the Union Water Power Minister Gajendra Singh Shekhawat regarding the Sutlej Yamuna Link Canal. After the meeting, Union Water Power Minister Gajendra Singh Shekhawat said that on 28th of last month, the Supreme Court had instructed to hold talks between the two states to resolve their SYL link canal issue. Due to this conversation has taken place today. Today the first round meeting took place in a healthy environment. Soon the Chief Ministers of the two states will hold talks again in Chandigarh and after this the full details of the talks will be placed before the Supreme Court.

You have to look at the issue from national security perspective. If you decide to go ahead with Sutlej Yamuna Link, Punjab will burn & it’ll become a national problem, with Haryana & Rajasthan also suffering impact: Punjab CM, in video conference with Union Jal Shakti Minister

After the meeting, Haryana Chief Minister Manohar Lal said that today’s meeting has been held in a cordial atmosphere and Haryana believes that the canal should be built but what its outline will be, it will be told in the Supreme Court that all the ways of dialogue are open at the moment.

At the same time, the Chief Minister of Punjab, who attended the meeting through video conferencing from Chandigarh, once again repeated the old stand of the Punjab government. He said that due to melting of the glacier, the water in the rivers has reduced. Subhe underground water level is also going down significantly. In such a situation, Punjab does not have additional water to supply to Haryana. During this, Punjab Chief Minister Captain Amarinder Singh said that Punjab is a border state adjoining Pakistan and Punjab continues to plow here on behalf of Pakistan, in such a situation that the situation in the state and the country can deteriorate if anything goes wrong. .

Let us tell you that during the hearing on January 28, the Supreme Court had given a rebuke to both the states and instructed that this is the last time when they sit down and tell the roadmap to resolve the matter. The court had directed to file the reply by the third week of August, after which the Supreme Court will hear the next hearing.

The issue of Sutlej Yamuna Link Canal between Punjab Haryana is 45 years old. In 1976, the central government issued a notification to provide 3.5 million acre feet of water to Haryana out of 7.2 million acre feet of water in Punjab. To take water from Punjab to Haryana part of the river, a canal was to be built to connect the Yamuna with the Sutlej river. Which is called SYL i.e. Sutlej Yamuna Link Canal. But the construction of this link canal took the form of a political dispute between Punjab and Haryana. After the Rajiv Longowal pact in 1985, this controversy was so politicized in Haryana that the Congress government in Haryana changed. Chaudhary Devi Lal, then the former Deputy Prime Minister, waged a war of justice in Haryana.

Today there was a meeting between Haryana, us & the Minister of Water Resources. I told them that after the division of Punjab in 1966, all assets of ours was shared on a 60:40 basis, except water, because they included the water of Ravi, Beas & Sutlej but not Yamuna: Punjab CM pic.twitter.com/T0kUbzpR7X

Travel from 200 rupees to 8.5 crores, the great success of a pizza delivery boy

That ‘brother’ of COVID-19, whose scientist is scared even by the call, can wreak havoc many times.

New feature will come soon on WhatsApp, know how you will be able to use it