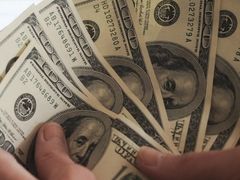 People close to the matter reported that even though Shah may not be such a big name on Wall Street, his Global Financing and Credit Trading Group makes an estimated 3 billion euros ($3.5 billion) annually, which is the most for the entire investment-banking division. It accounts for about a third of the revenue.

They said on condition of anonymity that after working with former fixed-income stalwarts such as Sajid Javid, now a British MP, and Rajeev Mishra of SoftBank Group Corp, Shah now heads a unit that Investment is the biggest money generator for the bank.

Their importance shows how, even after years of trying to back away from volatile business, Deutsche Bank has not been able to shun activities that pose risks in a market reversal.

Under Shah’s leadership, Deutsche Bank has solidified its role as one of the world’s largest credit traders. His global empire includes the distressed debts trading business, which has long been a strength of Germany’s largest bank.

“He was one of the pioneers who helped us build the markets business virtually from scratch,” said Anshu Jain, former co-CEO of Deutsche Bank. Anshu Jain worked with Shah for over a decade and is now the chairman of Cantor Fitzgerald LP. “Chetan has a decades-long track record of excellent quality management,” he added.

Even in Volatility, in the earning game of Share Market, 1 player gave 8% return in 4 days, where is the eye today

Amid the recent turmoil at the bank, which has led to the departure of Jain and several executives including former CEOs John Cryan and Juergen Fitschen, Shah is the only person to remain.

He has surpassed six CEOs during his more than 15 years on the credit team, serving as head or co-head for the past six years.

Despite the billions brought in by his team, Shah avoids the limelight from his office in the heart of Singapore’s Financial District. He even refused to make a statement or be photographed for this story.

Shah, a vegetarian who loves cricket, doesn’t even have a LinkedIn profile. Shah is a person who is not easy to understand, that is why for a banker working with him, he remains an enigma even today.

Born in India, Shah studied at the prestigious Indian Institute of Management Ahmedabad, being one of three students to graduate with a medal for academic performance. He joined Deutsche Bank in 1994, initially trading Indian rates and treasury bonds in Mumbai, before becoming head of global credit trading.

Shah moved to Singapore in 2005, joining several financiers attracted to the financial center for its proximity to other Asian markets.

At the time, Asia was playing a more important role for the bank, which was moving on from its early roots after setting up a Singapore outpost in the 1970s to allow German companies such as Bayerische Motoren Werke AG and Siemens AG to enter the sector. to help expand.

His team, spread across Hong Kong, New York and London, says people familiar with the business offer distressed loans and private credit in sectors from real estate to renewable energy in Europe, Asia and the US. It also has an example of Deutsche Bank’s more complex loan.

Shah’s business is showing no signs of slowing down. Fedorsic recently said that after a sluggish start to the quarter, revenue from trading securities picked up in the first weeks of August and September.

He confirmed the guidance that the revenue for the division which includes Shah’s unit would be. This year will be about 9.3 billion euros. The bank is going to declare the result on October 27.

Tax Talk: Be careful while filing ITR, not all taxpayers get this facility