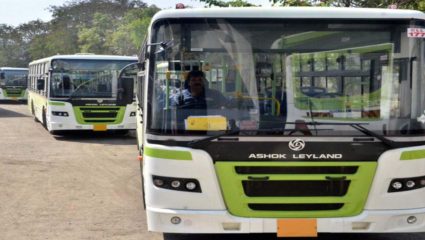 Nashik: The fare of the Life Line CityLink bus of Nashik city has been increased by 5 percent. This fare has been increased on the occasion of Makar Sankranti. Where the common people are being hit by Corona, the same bus service is not untouched by it. Due to Corona, the earnings of the bus have decreased. The CityLink bus administration has said to increase the fare to compensate for its loss. But the most surprising thing is that Mayor Satish Kulkarni is not aware of this. When he informed them, he was surprised at this.

Citylink bus service has started in the city in collaboration with the Municipal Corporation. But ever since the bus service has started, it is running at a loss. The fare for this bus service, which started in July last year, has been increased for the first time. But due to the increasing restrictions of Corona, Citylink is not getting sufficient number of passengers. Due to this the loss of CityLink bus service was increasing. For this reason it has been decided to hike the fare. In real terms, the rent has increased by 5 percent. There has been no hike in fares for some places, while long distance bus fares have been increased by Rs. Citylink administration has clarified that for the first time the fare has been increased by the bus management. Now the fare will be increased in January next year itself.

When the municipal bus service was started, diesel was getting Rs 60 per liter at that time. At present, diesel is available at Rs 100 per litre. Accordingly, the expenditure has increased. The fare has been increased by 5 percent, it will not have much effect on the citizens. Citylink administration said that at present CNG is being available in insufficient quantity, which is causing problems. Earlier five tankers of CNG used to come from Pune but now four tankers are coming.

First Citilink fix your service. People have to wait for the bus for hours. Their drivers and conductors are arbitrary. It is right if the fare is increased by improving the bus service. But at present the service is very bad. In such a situation, increasing the bus fare is completely wrong. I will oppose it. They are not serviced in many parts. Start the service in those parts first.

The matter will be discussed by calling the bus management. If the bus fare is unnecessary, ask the management to reduce it. On Monday, after discussing with the management in this regard, a decision will be taken.

At present, 148 buses of CityLink are on the roads. Of these, 48 buses are running on diesel while 100 buses are running on CNG. In the intervening days, the bus service was getting very good response. Earlier, 60 thousand people were traveling by bus every day, but due to the increase in the number of patients, now only 45 thousand people are traveling by buses every day. Because of this, Citilink’s earnings have come down. There is a loss of Rs 2 crore every month.

Bus fares in Pune and Mumbai are much lower than the fares CityLink is currently charging in Nashik. In Pune, a ticket for a 10-km journey costs Rs 15 while CityLink is charging Rs 25 for it.