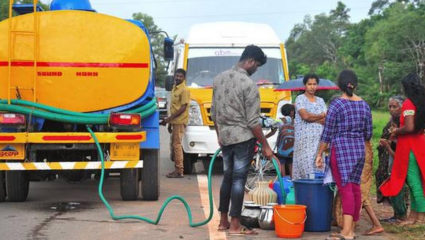 Pune: In the newly incorporated 23 villages in Pune Municipal Corporation, the Municipal Corporation will not supply water by tanker to the societies allowed for construction work by PMRDA. While constructing this, the builders concerned had accepted the responsibility of supplying water to the societies. Due to this, hundreds of societies of 23 new villages will have to immediately quench the thirst of the construction professionals at their own expense.

Responsibility of builders to supply water

These construction works have already been given permission by the Municipal Commissioner for the inclusion of these new villages in the Municipal Corporation. More than thousand projects have also been approved by PMRDA in these villages. Especially while granting permission for construction works, the responsibility of supplying water to the concerned societies will be with the builders concerned. Such an agreement was reached.

Evidence of societies increased due to low price

Thousands of new societies were formed in these villages due to the fulfillment of the dream of houses at low cost. It was not possible for the Gram Panchayat to supply water to these societies. Due to this some societies had to face problems for water supply. Water is supplied by tanker to many societies, but in view of the upcoming municipal elections, the wishers have started a vigorous effort for water supply by the municipal corporation. It has been clarified by the Municipal Corporation that at present only the builders will have to supply water to the societies. But the Municipal Corporation has taken the responsibility of water supply in Gawanthan.

the problem of being at the end

PMRDA has approved more than one thousand constructions in the last five years in villages like Sus, Mhalunge, Lohgaon, Wagholi, Pisoli, Undri, Ambegaon Khurd, Dhayari, Uttamnagar, Shivane etc. Of these, Sus, Mhalunge, Lohgaon and Wagholi have the highest number of schemes. Since these villages are at the extreme end of Pune city’s water supply system, water supply is being done at low pressure and for a short duration.