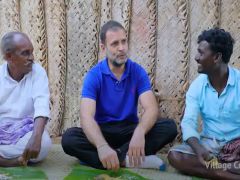 Former Congress President Rahul Gandhi has been in a lot of discussions during his Tamil Nadu tour. Rahul participated in Tamil Nadu’s famous YouTube channel Village Cooking. Now, this video of Rahul is becoming fiercely viral on social media. In this video, Rahul Gandhi is seen tasting mushroom biryani with local cooks.

Village Cooking Channel uploaded the video to its YouTube channel on Friday. Since then this video has become viral on social media. On social media, many people praised Rahul Gandhi for using the words of Rahul’s Tamil language.

After the dish was made, Rahul was offered mushroom biryani with raita on a traditional banana leaf. Village Cooking Channel wrote along with the video that today we have made Mushroom Biryani. Rahul Gandhi is enjoying a meal with us. We can never forget this moment in our lives. Thanks to Rahul sir.

Assembly elections are due in Tamil Nadu this year. In this connection, Rahul Gandhi is visiting Tamil Nadu.

Twitter announced the closure of Fleets, from August 3, the feature of posting stories will not be available

Stock market news in Hindi: Sensex and Nifty start trading with decline; Investors will keep an eye on these stocks

Consolidation in the market after recovery, earning trades from Rajesh Satpute