650 oxygen beds in the district, administration ready to control corona, PHC will become a place of COVID Center 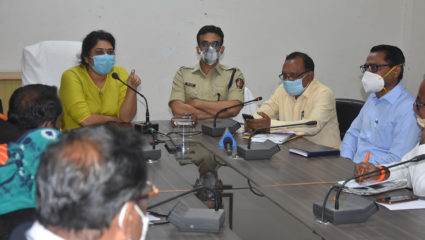 Wardha. The district administration has completed all preparations to face the possible third wave of Corona. The police, rural development, revenue and city development departments, including the health department, have completed their measures to handle the corona situation at their respective levels. All facilities will be available to corona patients as per requirement. Along with this, various departments will be working to implement the corona rules. Facility of 650 oxygen beds is available in the district. District Magistrate Prerna Deshbhratar gave this information in the letter council.

Arrangement in 11 including rural hospital

So… less likely to be corona

People taking both doses of vaccination are less likely to get corona again. Even if there is a corona, the symptoms will be mild. In the district, 91 percent of the people took the first dose and 60 percent of those who took the second dose. This proof needs to be increased. The District Magistrate has called upon the citizens to take the second dose.

6 departments have been authorized

Police will patrol even at night

The role of the police is important in controlling the corona situation. The Police Department has appointed Pathaks. Police will patrol at night also. The citizens should cooperate with the police department to control the situation. Under the instructions, police personnel above 55 years will not come in contact with other people, the Superintendent of Police informed about the assignment of responsibility through this method.

Sameer Wankhede in no mood to take extension in NCB, term ending on December 31