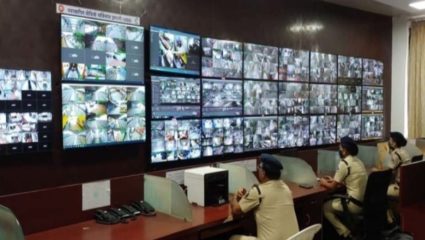 Mumbai: Central Railway has installed 3,122 CCTV cameras at suburban stations for tight security. It was told that in the last year 2021, 605 CCTV cameras were installed. The number of CCTV cameras has been increased to 3,122 to keep a watch on anti-social elements etc. in the crowd at suburban stations. Hi Masts are fitted for lighting at 12 different locations of 9 stations. These include Kurla (2), Thane, Kalwa, Kalyan, Asangaon, Shahad (1) at Ulhasnagar (3), Atgaon and 1 at Titwala stations.

Agreement has been signed with RailTel for provision of CCTV under Video Surveillance System (VRS) at all stations of Central Railway for which tender will be finalized soon.

In addition, block spots have been identified. Employees have been deployed at sensitive points for shooting or snatching cases. Awareness messages are also run regularly in suburban trains on Public Address System.

Operation of 110 rakes of local

On an average 110 suburban rakes are operated daily in Mumbai Division. Apart from this 105 Mail/Express trains are operated. Train escort personnel are also being deployed in night running trains. To improve the safety of women passengers, 5 special teams have been formed in Mumbai Division. Also launched ‘Meri Saheli’ and ‘Smart Saheli’ operations to focus on the safety of women respectively.

‘Unknown object’ may collide with ISS in space today, NASA and Russia clash over warnings