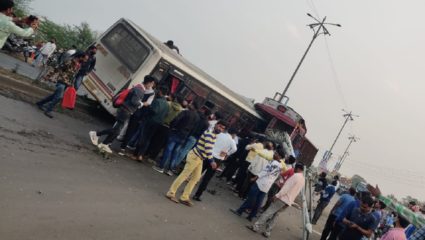 Warora, On Chandrapur Nagpur highway, a private bus crossed the divider and collided with a truck coming from Chandrapur side. The collision was so strong that the front part of both the vehicles rammed into each other. In which both the drivers died on the spot and 13 people were injured. This incident happened at 5.30 pm today.

Harsh Travels Private No. from Nagpur. MH 40 AT 481 left for Chandrapur today afternoon with about 40 passengers. According to the passengers, the speed of the bus was high. Therefore, the passenger requested the bus driver Sabir Sheikh (45), a resident of Chandrapur, to drive the bus slowly. Despite this, he was driving at high speed. As soon as the bus reached about 300 meters from Ratnamala Chowk in Warora.

At the same time, when the driver of the bus lost control, the bus collided with truck number MH 40 BG 9540 coming from the opposite direction, crossing the divider of the uncontrolled bus highway. The collision was so strong that the front part of the bus and the truck rammed inside each other in the cabin. In which both the drivers died on the spot.

Two passengers were pulled out by cutting them from the grinder

A woman and a 15-year-old teenager were trapped as the two vehicles entered each other’s cabin. On seeing this, both were pulled out after cutting the bus with the help of a grinder. Around 13 people aboard the bus were injured. All the injured have been admitted to the sub-district hospital Warora with the help of an ambulance. where he is being treated.

Both the vehicles got stuck in each other so badly. Due to this, the traffic of Chandrapur Nagpur Highway got completely jammed. Due to which there was a long queue of vehicles on both sides. But it was getting difficult to remove both the vehicles. So the help of JCB and Diadra was taken. Till the time of writing the news, efforts are being made to separate the two from each other.

As soon as the information of the incident was received, SDO Subhash Shinde, Sub-Divisional Police Officer Ayush Nopani, Tehsildar Roshan Makwane, SHO Deepak Khobragade reached with their team force. First of all, it was necessary to separate the two vehicles and smooth the road traffic. Therefore, with the help of ambulance, send the injured to the hospital immediately to know the condition of other injured. Tried to smooth the traffic of the city.