16 squads deployed for implementation of Corona rules in Pimpri, violation of rules will be costly 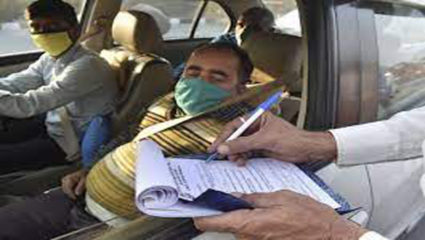 Pimpri: After Mumbai and Pune, the number of corona patients is increasing rapidly in Pimpri-Chinchwad too. For this, measures are being taken by the government and administration. Strict restrictions have been imposed and night curfew has been ordered. Its implementation has started. Pimpri-Chinchwad Police has once again entered ‘action mode’ against the backdrop of Corona. The police and the Municipal Corporation have jointly formed 16 flying squads to take action against the violators of the Corona rules. Action will be taken against the citizens who violate the restrictions by these squads.

Restrictions were eased last year as the number of patients decreased. Then a picture of a large number of citizens coming out of their homes has come to the fore. With the new variant of Corona, Omicron, the number of corona patients is increasing day by day. That’s why concerns are being expressed. Therefore, the administration is appealing to the citizens to follow the restrictions by imposing a blockade and communication, but it seems to be ignored. There is a picture of a crowd in public places. So 16 squads have been formed. There will be a team of five people, including a police officer and staff, as well as officers and employees of the Municipal Corporation. Each team will inspect its boundaries and team action will be taken if restrictions are found to be violated.

500 rupees without mask and 1000 rupees fine for spitting

Some citizens are seen roaming around the city without wearing masks. Along with this, some people are also seen spitting in the open. In view of this, a fine of Rs 500 will be imposed for not wearing a mask and Rs 1,000 for spitting in the open. Action will be taken against such people by the flying squad as well as the local police and traffic police. Citizens who have not received two doses of Corona Ban vaccine are being barred from entering government offices. Traveling by public transport is prohibited. These citizens should not be allowed to enter hotels, shops and other public places. The police have also been directed to appeal for a second dose.

Under Pimpri-Chinchwad Police Commissionerate, 30 policemen have been found infected with corona. It has nine officers and 21 employees. The number of policemen affected on Saturday was 14. Symptoms of corona have been found in one of these policemen, at present he has been admitted to the hospital for treatment. The rest of the police showed no symptoms and were isolated at home. Establishments that violate government-imposed restrictions should be prosecuted and fines imposed on unruly drivers and citizens who roam without masks. A similar order has been given by Police Commissioner Krishna Prakash. The commissioner has said that strict action should be taken against those who disobey the curfew order.

This beautiful scooter of BMW will make other brands leave, will be launched in India soon

Australia: ‘Delta variant’ worsens situation, declaration of emergency in New South Wales, half of the country’s population ‘locked’ in homes