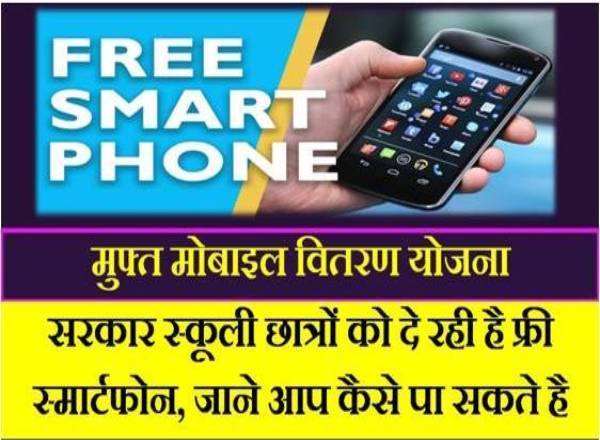 Free Smartphone Yojana: The Punjab government is going to fulfill its promise and is giving mobile to students for free, yes the Chief Minister of Punjab has said that free smartphones will be given to girls in the state. We are going to tell you about what is the Punjab Free Smartphone Scheme of Punjab Government, who are the beneficiaries, how will the application be made.

What is Punjab free smartphone plan

In Punjab, the scheme was being announced with the aim of digitizing youth. Under the scheme, the government will give the mobile phone directly to the beneficiary, for this they will not have to pay any kind of fee, let’s know what the student will have to do for this.

The objective of this scheme is to first get mobile phones to the youth so that they can be digitally connected. But now the objective of the government has changed. Right now everyone is sitting at home in the Corona era, school college is all closed, everywhere is studying through online class, there are many such children who do not have a smartphone, the government does not want any child from this online class Be deprived In Corona time, smartphone has become a very important tool for everyone.

How many mobiles are being distributed?

The government has just got 50000 mobiles ordered. In the first phase, the same number of mobile students will be distributed. The government said that the children will be given free calling and internet facility for one year in the free mobile so that they do not have to bear any kind of cost, this free smartphone will get 12 GB data and 600 minutes of talk time, which the child can easily get anywhere This scheme of the Punjab government was initially being introduced for the children of private and government college and technical college, but now the government has changed its beneficiary. Now the children of 11th and 12th will get the benefit of the scheme.

Chief Minister Amarinder Singh said that in view of the prevailing situation between India and China, before making mobile, he made sure that where the lava mobile company is, and what is its relation with China. The company, only then the mobile manufacturing process was pushed forward.
All mobiles will be touchscreens, including a basic camera.

The Punjab Free Smartphone Scheme will benefit only children living originally in Punjab. The Punjab government has mainly stated that this time only girls will be benefited in the first phase of this scheme. Girls, irrespective of their caste, class, can avail of this scheme. The government will give free mobile phones to girls who are studying in 11th and 12th. The government is doing this because, because of Corona, these children can take the facility of online class and their year should not be bad.

The Punjab government has said that the benefit of this scheme will be available only to those students who really need it and do not already have a mobile. Do not be deprived of the scheme.

Under the free smartphone, the government will give mobile directly to the beneficiary. Now this school is for the students of the school, it is the responsibility of the school premises to register their school under this scheme, and add the name of the eligible applicant in their school to the scheme to get the youth mobiles from themselves. Will not have to apply. Just you have to make sure that your schoolmates have all your documents or not. After the correct information, you will get a mobile from the government.

You can contact your school to check whether you will get the benefit of Punjab free smartphone scheme. The school will have information about when the mobile will be given.

PM Kisan Yojana 6th Installment: installment of the scheme will come in 24 hours, check your name in the list like this

Feeling scared in the market! Quit ‘Guaranteed Return’ and choose the right product, you will get a higher return