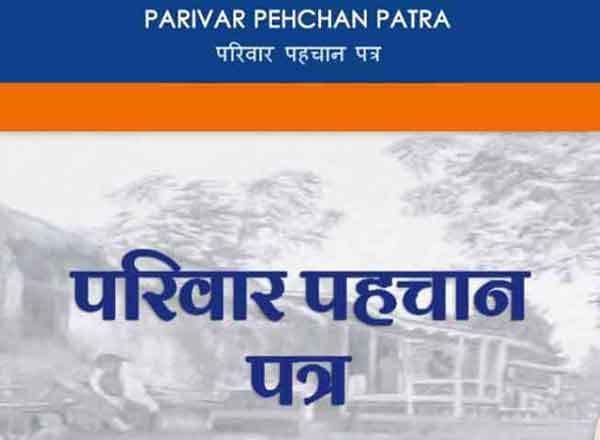 Haryana Parivar Pehchan Patra Create family identity card with these documents, you will get benefits of schemes sitting at home: A major decision has been taken by Haryana Chief Minister Manohar Lal Khattar, under which the citizens of the state will now have to get a Family Identity Card on Tuesday to take advantage of the schemes implemented by the central and state government, after which you state You will be able to easily take advantage of every scheme implemented. At the same time, Haryana has become the first state in the country where all the families are being given Parivar Pehchan Patra under the Mera Parivar-Meri Pehchan Yojana.

How to make Haryana Parivar Pehchan Patra with these documents

At the same time, data of 56 lakh families has been collected in the state, in which the work of making family identity cards of 18 lakh 28 thousand families is going on fast. By the end of August, 20 lakh families will be made and handed over smart cards. Also, family identity card will be mandatory to avail any government scheme after three months. Under this Parivar Pehchan Patra, you will be able to take advantage of the schemes run by the government sitting at home. For information, let us know that any family member who is 18 years old will get a message on his phone that his Family Identity Card has been made. With this, old age pension will start automatically at the age of 60 years.

Family identity card given to 20 beneficiaries

Also, the state chief minister has announced that within the next three months, all welfare schemes of all government departments of the state will be linked to these identity cards. Along with this, an official statement said that Khattar also distributed ‘Family Family Identity Card’ to 20 beneficiaries at an event in Panchkula.

For making Haryana Parivar Pehchan Patra, forms can be taken free of cost at all ration depots, tehsil offices, block development offices, gas agency, government schools, Atal Seva Kendras and Saral Center. Also, fill the information of yourself and all the family members in the form and submit the necessary paper. The concerned officials will investigate the form. On getting everything right, the applicant will get Parivar Pehchan Patra with an eight digit ID in the form of a smart card. In this, the name of the head of the family will be at the top, while the information of the rest of the members will be at the bottom. Applicants can also check their status or the status of their application by visiting the official portal or official website of Saral Seva Kendra after completion of all the process.

This document is required to apply

If you also want to take benefit under Haryana Parivar Pehchan Patra and want to know its benefits, then this is a mistake.

1). Fraud in the government schemes will stop Only the right beneficiaries will get the benefit of the schemes and those who are benefiting from the wrong way will be separated.
2). The government will have a complete record of who is getting benefit of which scheme and who is not.
3). Government offices will not have to be attacked to take advantage of the schemes. The software will ensure that the beneficiary is benefited by removing all the information including the prescribed age limit.
4). All the pension including old age pension will be received through Parivar Pehchan Patra.
5). People will get the benefit of the schemes at their doorstep.
6). The government will know in which area the family lives. Separate code has been created for each region. There will be a separate code for cities and villages.

Also read: – PM Kisan Scheme: Check whether or not your account came to Rs 2,000 under the scheme

Budget Friendly Countries: Budget is low and want to move around, then the attitude of these five countries is not less than paradise

Shock to Nirav Modi, New York’s bankruptcy court did not accept the petition to dismiss the allegations of fraud