Budget 2021: Big announcement of disinvestment of PSBs, but difficult to implement 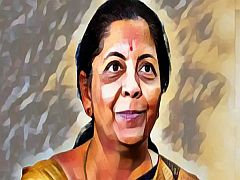 Finance Minister Nirmala Sitharaman said in her budget speech that apart from IDBI Bank in the banking sector, the government will reduce its stake in two more banks and one general insurance company.

This statement is very important in many ways. First, it proves that the Narendra Modi government is committed to bold reforms. Second, if this effort is implemented successfully, the government will further increase private sector participation in this important sector.

If the past is reconstructed, it will be known that many governments have promised to privatize banks, but no major progress has been made in this area.

This time the government seems serious about its plan. Stocks of government companies gained momentum after the Finance Minister’s budget announcement. Investors have seen the government’s proposal as a positive sign.

The governments were not moving forward on the privatization of public sector banks because it is a politically sensitive issue. The government will have to face the wrath of strong trade unions. These unions have strongly opposed this idea.

The government currently holds more than 70 per cent stake in at least 10 banks by December 2020.

There are eight banks in which the government has more than 80 percent stake and three banks hold more than 90 percent government stake. These banks are Indian Overseas Bank, UCO Bank and Bank of Maharashtra.

In this sector, privatization has been seen as an effective tool to increase working efficiency, bring in private capital and create more competition in the market.

After the Finance Minister announced the disinvestment in two more banks on Monday, global rating agency Moody’s has said that this decision will prove to be better for the sector.

Moody’s stated, “The government’s decision to sell its stake in two state-owned banks is credit-negative for these banks as it would prevent these banks from getting existing government support.” However, with privatization, these banks will become more market based which will be good for the entire industry. ”

Siddharth Purohit, senior banking analyst at Mumbai-based SMC Global Securities, has also said that the decision to sell a stake in state-run banks is a good thing in terms of reform.

Purohit says, “We have heard such announcements even in the past. But, this time the government has announced it in the budget, which shows the strong intentions of the government. ”

The most important thing in this is to implement this disinvestment plan. In 2014, an RBI panel headed by PJ Nayak submitted its report and recommended that the government should sell its ownership in public sector banks. However, this report remained largely neglected in the context of privatization.

Capitalization, but not enough

Apart from the announcement of privatization, the next big priority for the banking sector was the amount of capital the government banks were getting from the government-facing capital shortage.

So far in the financial year 2020-21, the government has infused fresh capital of Rs 5,500 crore in state-owned banks through special interest securities.

The announcement of capital of Rs 20,000 crore is very low for these PSBs. According to Moody’s, these banks, which are facing acute shortage of capital, will require capital of around Rs 2 lakh crore in the next two years to deal with bad loans, meet regulatory requirements and provide loans to large borrowers.

Consulting firm Ernst & Young has said in its note on the budget, “The additional capital of Rs 20,000 crore is very low in view of the problems facing these banks, but this can be offset by the disinvestment of the banks which are not doing well. . ”

Government of India has infused capital of Rs 3.16 lakh crore in public sector banks over the years. In the last budget, the government did not announce any capital infusion in banks.

In this budget for the banking sector, the Finance Minister has made the third major announcement to create an asset reconstruction-asset management company. This unit will be called ‘Bad Bank’.

The idea of ​​Bad Bank has also been supported by senior bankers and other experts in the financial sector. They say this will help in early disposal of bad assets.

Debt Recovery Tribunals and Insolvency and Bankruptcy Code (IBC) mechanisms have been limited to a few large cases. Bad bank can help in disposal of baddons through an ARC model.

The IBA proposed it to the government in May 2020, but the concept could not be implemented at that time.

Overall Finance Minister has given a blueprint for a reform for the banking sector in the 2021 budget. Especially for the privatization of public sector banks, it shows a big reform. However, the success of this plan lies in its implementation.

Bad Bank to be formed in 1 to 2 months, new DFI may merge IIFCL: Financial Services Secretary

AirPods Max: Apple launches its first over the year wireless headphones, priced at Rs 59,900 in India