Budget 2020: Government forgot the common man in giving relief to the industry 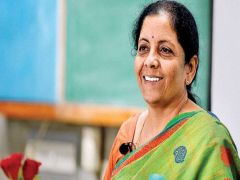 After the coronavirus infection, it was expected that the government’s focus this time would be on promoting the economy, companies and industry. So according to this expectation, Finance Minister Nirmala Sitharaman presented the budget. In this, many announcements were made to promote industry and economy but the common man was ignored. The common man sees the budget with the hope that in the second phase of the budget, a decision will be made for his pocket. But this time nothing of the sort happened.

The Finance Minister has given some relief to the senior citizens. Now people above 75 years of age will not have to file income tax returns. That is, those who have a pension or interest income as a means of earning income, they will no longer have to face the problem of filing returns. However, he has not clarified whether the dividend income will come under this ambit. After the details of the budget will come to know about it. However one thing that is absolutely clear is that the common man has not been given any relief in income tax.

The finance minister had repeated these lines of Guru Ravindranath Tagore while opening his budget speech. Referring to the poetry of Rabindranath Tagore, he said- Hope is the bird who feels the light and sings while the dawn is still dark. Trust is like a bird that starts twittering before dawn, realizing the light. Similarly, we should not give up hope in difficult times.

Finance Minister Nirmala Sitharaman made it clear at the beginning of her budget speech that the government was ready to promote growth in any case. He pointed to two things, the hard work and expense of the government in fighting the corona virus and second, the difficulties faced by the people. This led to the feeling that the people may also get something, but after the budget is over, these hopes are also postponed to next year.

In her first budget presented after the coronavirus infection, Nirmala Sitharaman has given a good relief to insurance companies. The foreign investment limit has now been raised to 74 percent in the insurance sector. Earlier it was 49 percent. Insurance companies have been waiting for this for a long time.

Stock Tips: Reliance shares fall after the announcement of financial results, this is the opinion of experts regarding investment

Be careful who spend cash everywhere, income tax notice will come home after doing 10 such transactions

Video: US President was attacked by insects, Biden was upset and said – be careful with this