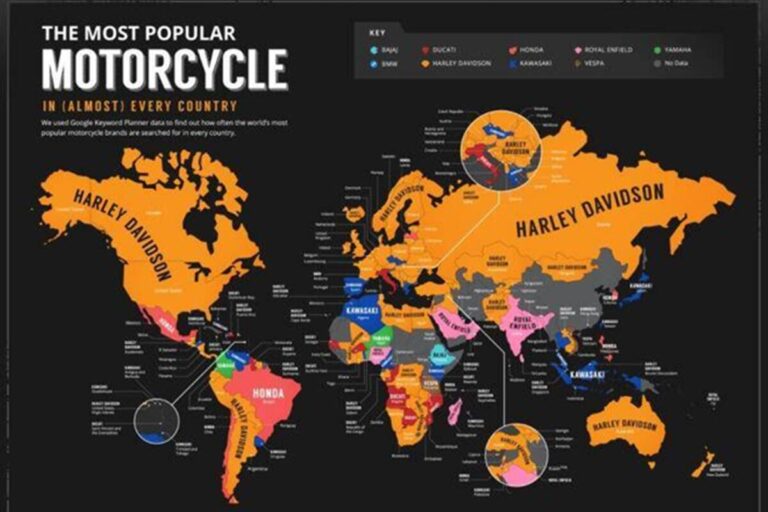 Royal Enfield has long been the most preferred motorcycle in India. Budget Direct Motorcycle Insurance has prepared a world map showing which bike is most liked in all countries, which bike is liked by people globally. According to this map, Harley Davidson is the most liked in the world, which is shown in orange color. Google keyword data was used to prepare this map. According to this, an attempt was made to know which bike is being searched in any country on the Internet.

However, Harley Davidson and Yamaha are also preferred in the South American continent. European vehicles like Ducati are also liked by people in Jamaica, Dominican Republic and Guyana.

Kawasaki in the Czech Republic and Slovakia

2020 Guangzhou Motor Show: Curtain lifted from Hyundai Mistra Electric, how much distance will be covered when full charged?

Ducati is most preferred in Italy and Kawasaki is more liked by the people of Spain. Talking about the African continent, there is diversity in the choice of this entire continent. The Indian bike also remains the choice of the people here. The most famous is the Royal Enfield in Saudi Arabia, Oman, UAE, Qatar, Bahrain and Nigeria. Bajaj Auto is the most searched bike on Google in Ethiopia.

In the southern part of the African continent, except for Tanzania, only Harley Davidson and Ducati were searched on the Internet. In Tanzania, people liked Vespa more.

Pendragon, the London-listed automotive vendor behind manufacturers together with Evans Halshaw and Stratstone, has acquired…

China's big cities are starting to look past Covid, while rural areas brace for infections