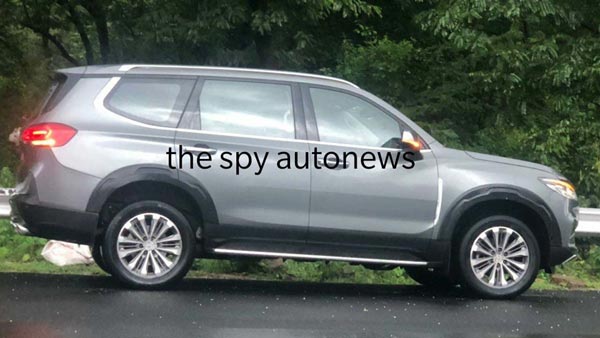 However, the launch of several cars has been postponed or delayed due to the Corona epidemic. Now testing of MG Gloster is going on, recently this car has been seen during testing. The MG Gloster is completely covered in the pictures that have surfaced but some exterior information of the car has been revealed.

As can be seen in the pictures, the test model has two exhaust pipes. Apart from this, the car has 6 spoke split alloy wheels. The car also has a wiper on the rear windscreen. Let us know that the pictures of MG Gloster’s interior have also been revealed many times. The MG Gloster is built on the platform of the Maxus G10. The steering wheel of the Gloster is designed to be similar to the MG Maxus G10.

The car has an Audi-style gear lever, which is given in the third-generation Audi A8. However, dashboard information has not been revealed yet. Talking about the dimensions of the Gloster, this car is 5005 mm long, 1932 mm wide and 1875 mm high, which is much more than a normal SUV sold in India.

This SUV will be available in 6 and 7 seat variants. Talking about the Gloster engine, it will also be offered in a diesel engine option along with petrol. According to the information, the Gloster will be launched in the first 2.0-liter turbocharged diesel engine. This engine produces 221 Bhp of power and 360 Newton meter of torque.

The car can be mated to an 8-speed automatic and manual gearbox. Talking about the design of MG Gloster, it has a three-slate chrome grille in the front and MG logo in the middle, LED headlight on both sides. Its bonnet is placed above, it has attractive wheel arcs and roof rail.

Its window line is placed in chrome which meets the roof rail. Its door handle has also been kept in chrome, the rear part has been given a sporty look. The rear LED taillight and four exhaust pipes are provided, which makes it look great. The MG Gloster can be launched at a price of Rs 40-45 lakh (ex-showroom) in India.

To compete with Airtel, Vi introduced a new plan, getting great benefits for Rs 128

Isaac Herzog sworn in as the President of Israel, said – the mission is to serve all citizens

Google’s CEO also feels that he should increase his surfing skills, know why